A Pre-K Test for Giftedness and Other Crimes Against Nature

Last updated 4/14/08
If our species is not one of the million or so that will be wiped off our feverish home planet in the next fifty years, our grandchildren, even so, will doubtless curse us for our complacency, detachment, selfishness, and criminal neglect. And if there are still historians who are not too busy foraging for food and water to consider the recent past, some of the events that we accept today as a matter of course will no doubt seem bizarre, inhumane, primitive perhaps. One can hope.

There will be those bizarre large events to look back on, as all the President's men and women sitting around the White House deciding which interrogation method to use on which Gitmo prisoner, even though most of the choices on the list are condemned by the Geneva Conventions.

And there will be those much smaller, though no less bizarre, phenomena such as children being tested for kindergarten and first grade talented and gifted school programs in New York City Schools and elsewhere. 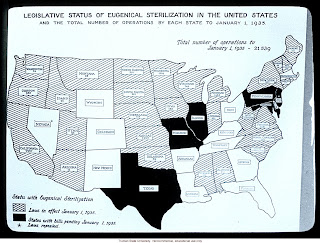 If there are still educational historians or psychologists fifty years hence, they will cringe, no doubt, when they read about the inappropriate, nonsensical, exclusionary, and racist policies and tests that were used to sort post-toddler children before they even got a chance to go to school. What were they thinking back in 2008, and had they not learned anything from the lessons of the early 20th Century when school leaders used primitive IQ tests to sort the misfits from the able, with the dream, turned nightmare, of creating the perfect, efficient society ruled by the able(click on map to enlarge)? Did they not recall the efficiency experts blithely using their high-stakes tests written in a language that many children did not speak, much less read, to make life-altering decisions? Did they not know that those children who did not make the cut-off score on the standardized test for 4-6 year-olds, an insane prospect on the face of it, would be eliminated from the humane, enriched education reserved for those children of privilege and "giftedness" who made the cut?

Of course they knew. Just as they knew in New York City in 2008 that the Bracken School Readiness Assessment, the 10-15 minute assessment that is to be used along with their closet IQ test, the Otis-Lennon, was not even designed to identify the "talented and gifted" four, five, and six year-olds among us. This is from Pearson's own website:

The Bracken School Readiness Assessment is a non-verbal screener that helps determine if a child has an underlying language disorder that requires further evaluation. Quick and easy to administer it includes the first six subtests from the Bracken Basic Concept Scale, Revised (BBCS-R): Colour, Letters, Numbers/Counting, Sizes, Comparisons, and Shapes.

Includes information on how to develop local norms based on your school or area population to be more reflective of your clients.

This helps establish criteria for identifying children at risk of educational failure.

Did Bloomberg/Klein look to see back in 2008 that a big chunk of the evidence offered to support the inappropriate BSRA was published in a non-refereed journal, the Journal of Psychoeducational Assessment, for which Dr. Bracken, himself, serves as consulting editor and co-founder?

JPA is well known internationally for the quality of published assessment-related research, theory and practice papers, and book and test reviews. The methodologically sound and impiricially-based [sic] studies and critical test and book reviews will be of particular interest to all assessment specialists including practicing psychologists, psychoeducational consultants, educational diagnosticians and special educators.

Or will the introduction of the BSRA become more widespread, a tool to be used for what it was intended to do--to identify and treat the less able child in environments that will shape their limited capacities in ways that can serve the social good, i. e., the global economy? In the way, perhaps, that Goddard, Yerkes, and Terman had in mind, those proudly-racist eugenicist-scholars whose contributions are uncritically noted in a chapter written by Kelley and Surbeck on the history of testing in The Psychoeducational Assessment of Preschool Children (2004), edited by Bruce Bracken (yes, the same Bracken):

Numerous translations of the Binet scale appeared, including the English translations provided by Henry Goddard in 1908 and 1910. In response to interest in the scale, Goddard and his associates at Vineland Training School established test administration seminars for teachers and championed the importance of early diagnosis. He advocated the systematic testing of children and the special placement of limited-abilities students in classes especially created and staffed with trained teachers. Thus the seeds of special education classrooms were planted some 65 years prior to the passage of Public Law 94–142, the Education for All Handicapped Children Act (Kelley, Sexton, & Surbeck, 1990). As can be seen by the following quote, Goddard (1920) enthusiastically endorsed the power of systematic testing and its potential impact on human progress and the creation of social order:

…it is no longer possible for anyone to deny the validity of mental tests, even in case of group testing; and when it comes to an individual examined by a trained psychologist, it cannot be doubted that the mental level of the individual is determined with marvelous exactness. The significance of all this for human progress and efficiency can hardly be appreciated at once. Whether we are thinking of children or adults it enables us to know a very fundamental fact about the human material. The importance of this in building up the cooperative society such as every community aims to be, is very great, (pp. 28–29)

In addition to the flurry of activity by Goddard and his associates, Kuhlmann (1912, 1914) published two versions of the Binet scales, and it was his second version that extended the test items downward to address intelligent activity at 2 months of age. . . . Even though Goddard's vision about the benefits of systematic testing was not realized, significant progress was made in establishing the scientific acceptability of psychometric testing (Kelley, Sexton, & Surbeck, 1990). While these important scientific gains were made in Europe, related issues were afoot in the United States (pp. 3-4).

Goddard's vision, indeed. To associate Goddard's ideas as foreshadowing the Individuals with Disabilities Education Act is the equivalent of suggesting Joseph Goebbels was the forerunner of Edward R. Murrow. Strenuously ignored above are details on the "benefits of systematic testing" that Goddard had in mind. Below, then, is a more contextualized account by David Pfeiffer (1994), which offers details of Goddard's charade that are disturbingly ignored in the Bracken book:

While traveling in Europe he met Alfred Binet and returned with his intelligence test which was to become the cornerstone of Goddard's research. The Binet test was to be used by Goddard and future generations to detect mental defectives. As late as 1981, 92% of the state vocational rehabilitation agencies in the United States were using some form of an IQ test to diagnose mental retardation and in 80% of the states no formal adaptive behavior assessment was used to validate the conclusions based on the test results. (Sheldon, 1982) For example, Rhode Island (Gen. Laws, 40.1-22-3 (5)) defines a mentally retarded person as one "with significant subaverage general intellectual functioning two (2) standard deviations below the normal...." Even though IQ tests give questionable results, "experts" place great reliance upon them even today. (Snyderman & Rothman, 1989)

After establishing (to his satisfaction) that feeblemindedness was inherited, Goddard turned to the policy question of how to combat the many social ills which the feebleminded brought to society. He focused on the slums where, he said, most of the crime, poverty, and immorality existed. As he wrote (quoted by Smith, 1985: 18):

If all of the slum districts of our cities were removed tomorrow and model tenements built in their places, we would still have slums in a week's time because we have these mentally defective people who can never be taught to live otherwise than as they have been living. Not until we take care of this class and see to it that their lives are guided by intelligent people, shall we remove these sores from our social life.

Of course, Goddard and others would be the "intelligent people" who guided the "mentally defective people." How would he undertake to remove the "sores"? Sterilization was advanced as a temporary measure, but segregation into institutions was the final solution. Again, as Goddard wrote (quoted by Smith, 1985, p. 19):

Such colonies [institutions] would save an annual loss in property and life, due to the action of these irresponsible people, sufficient to nearly, or quite, offset the expense of the new plant. . . . Segregation through colonization seems in the present state of our knowledge to be the ideal and perfectly satisfactory method.

People with disabilities were to be segregated and sterilized for the betterment of society.

Although Goddard's work was soundly criticized by some for its abysmal methodology and its faulty genetics, it was widely praised by others. Each criticism received a reply from either Goddard or from a defender of Eugenics (Meile, Shanks-Meile, & Spurgin, 1989). Persons made their academic career by writing about this country's moral degradation and proposals for ridding the country of this scrouge [sic] of feeble mindedness.

Apparently, it is still widely praised by some.

The New York Times has the story on the new gifted plan in the City, offering details on which parents will find in their mailboxes a ticket for their child to attend a humane school, rather than a test prep chain gang for those of lesser worth.

Not to worry, though. The Bloomberg/Klein braintrust has increased the chances to get in one of the gifted school programs. With the generous new criteria, now the South Bronx will have 13 children attending, rather than 5.

In researching this piece, I found a touchingly-honest piece in the New York Sun by a parent, who shares with readers some of the thoughts and feelings associated with her own daughter's chances at becoming one of the ones:

. . . . I dread finding out whether my daughter and her friends are or are not deemed "gifted." Although I don't put a lot of stock in the assessment process, especially considering how widely a small child's performance can vary depending on his or her mood on testing day, I can't avoid my visceral faith in the labels and ranks that tests confer. For all the rhetoric I spouted as a teenager about cultural biases and multiple intelligences, I remember feeling smug when I learned that a seemingly bright peer had scored lower than I had on the SAT. Will my opinion of my daughter change if she is not deemed gifted? Isn't kindergarten a bit early to be deeming children as smart or not, and to be tracking them accordingly? . . . .