Spellings Go Home and Other Good Signs from MIT 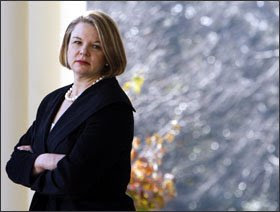 An astute summation from the MIT Faculty Newsletter :

As President Bush approached his final year in office, his Secretary of Education released the administration’s major policy document on higher education, a report from The Commission on the Future of Higher Education. The Commission was appointed by U.S. Secretary of Education Margaret Spellings, long time education advisor to President Bush. The Commission’s August 2007 report contains a number of commendable recommendations: expand the fraction of our citizenry that participates in higher education; remove barriers to access, such as lack of academic preparation, financial means, or understanding how to navigate the process; and increase emphasis on science and engineering education. But perhaps of most concern, is the introduction of the notion of extending the central thrust of Bush K-12 education policy – standardized testing – to higher education.

The report addresses the major barrier to access – affordability – mostly by advising that applications for federal financial aid be streamlined and simplified. The only recommendation for a boost in direct financial aid – which would help more students actually afford to attend a four-year college – is limited to increasing the target of Pell grants over five years to 70% of the average State tuition at public four-year institutions. While this would be a valuable step forward, it is still woefully inadequate, for example, for research universities and private four-year colleges.

The report gives more emphasis to cutting costs than increasing investment. This business model is not surprising given the composition of the Spellings Commission, which was laden with corporate officers.

Also participating were four university presidents, including MIT’s former president Chuck Vest and James Duderstadt of the University of Michigan. Only three of the 18 members were active faculty, and none were active scientists.

Committee Chair Pushes Standardized Tests for Universities
A new element in the report was the call for increased “accountability” for institutions of higher education. In the Bush/Paige/Spellings Department of Education, this term has generally translated into assessment through standardized testing. The report clearly calls for implementing forms of standardized assessment so as to be able to compare “performance” of diverse higher institutions. A recent New York Times article (February 9, 2008) quotes Charles Miller, the investor who chairs the Commission: “What is clearly lacking is a nationwide system for comparative performance purposes, using standard formats.”

As faculty with children in public school know, a major change in the K-12 school environment has been brought about by the implementation under the Bush administration of the federal No Child Left Behind (NLCB) Act, the catchy misnomer given to the reauthorization of the Elementary and Secondary Education Act. The damaging effect of the use of a single standardized test as the sole measure of student progress has been documented in a series of recent books and reports. These include Collateral Damage: How High-Stakes Testing Corrupts America’s Schools, by Sharon L. Nichols and David Berliner (2007); Many Children Left Behind, edited by Deborah Meier and George H. Wood (2004); and When School Reform Goes Wrong, by Nel Noddings (2007).
Given the Bush administration’s track record of ignoring what students and public schools actually need, it is perhaps not surprising that its policy of substituting mandatory commercial standardized testing for authentic assessment and quality education is now being extended to higher education.

Though the Spellings/Miller call to bring colleges and universities into an NCLB-style “accountability” system may sound laudable to some, it represents retrograde educational policy. Colleges and universities are responsible for producing individuals with a vast variety of skills and talents. Engineers, architects, electricians, physicians, and lawyers are familiar with licensing and certification tests which control access to their professions. The mission of these tests is to set a floor of competence and ensure that practitioners meet some minimum standard of proficiency.

But colleges, and particularly research universities, play a different role in our society. We need their activities to expand knowledge, open new horizons, and raise ceilings in all areas of human technical, social, and economic activity.

Requiring every biochemistry course in the U.S. to prepare students for a single national test in college biochemistry will narrow instruction, snuff out new initiatives, and alienate both students and teachers.

The appropriate measure for college courses needs to be tuned to the local curriculum, and include lab reports, research papers, classroom exams, and other inquiry-based assessment tools. (For a concise critique of the impact of standardized testing on science education in Massachusetts see www.ParentsCare.org/news/sciencemcas.htm.)

Teacher, parent, civil rights, and youth advocacy organizations have uniformly rejected standardized high stakes tests as doing far more damage to schools than good. More than 140 national education, civil rights, religious, and labor organizations, representing millions of concerned citizens, have called for a major overhaul of the No Child Left Behind Act (www.fairtest.org/joint-organizational-statement-no-child-left-behin). A number of State legislatures have moved to reject Title I funds in order to be able to ignore the NCLB regulations that are mandatory only if the State accepts federal education dollars (www.fairtest.org).

Texas Origins of Bush Education Policy
The Bush administration has relied heavily on the Texas school system for the formation of education policy. His first Secretary of Education was Ron Paige, former Superintendent of Schools in Houston. Margaret Spellings was Senior Advisor to Governor Bush for six years in Texas. Charles Miller was Chair of the Board of Regents of the University of Texas system. Texas was one of the first state systems to institute high stakes testing as the criteria for high school graduation (TAAS – Texas Assessment of Academic Skills).

Both court cases and recent studies indicate the TAAS system contributed to the disastrous school dropout rate in Texas, 38% overall (Linda McNeill, et. al, “Education Policy Analysis Archives,” January 2008). In a large urban school district, 60% of African-American students, 75% of Latino students, and 80% of ESL students failed to graduate within five years. These students were excluded from the test score analysis, resulting in then-Governor Bush claiming great gains in high school education (dubbed the “Texas Miracle”). As test scores became the only criteria for evaluating teachers and schools, they have distorted and corrupted many aspects of the school system, as described in detail in Collateral Damage. Misreporting of student data in Houston was one of the factors that led to the resignation of Secretary of Education Paige.

In fact, Texas has one of the lowest percentages of college attendance in the country, and half of entering college and university students require remedial classes. Most of the evidence indicates that the emphasis on a single standardized test further undermined an already stretched public school system.

There is no evidence to date that the Bush education policy of replacing emphasis on teaching and learning with emphasis on testing increases the quality or quantity of high school graduates. Continuing these policies will decrease the level of education and skill of our future workforce.
Who is Behind the Push for Standardizing Testing as the Only Measure of Learning?
If parents, teachers, professional educators, and scholars reject high-stakes standardized tests as a valuable educational tool, who supports them? The major support for high-stakes testing comes from a well-organized wing of the corporate sector, including the U.S. Chamber of Commerce, the National Association of Manufacturers, and the Conference Board. In part, this represents the growth of the testing and test prep business as a profit center. Public education is the largest sector of the U.S. economy that has not been privatized and is a target for a sector of the business community. Production, publication, distribution, and scoring of State tests is now a multi-billion-dollar business. Companies such as Edison Schools, Leona Group, and National Heritage Academies operate for profit schools and actively promote privatization of K-12 education.

The globalization of the economy is also having an effect. As manufacturing has moved abroad, followed by increasing high-tech work, the corporate need for highly trained workers within the U.S. is declining. As shown by the recent report from Lindsay Lowell and Harold Salzman (see Business Week, October 26, 2007), there is no shortage of highly-skilled workers in the U.S. Faculty sitting on hiring committees, or trying to place their own students, know that there are far more talented and trained individuals than there are positions. This has been a growing source of tension and anxiety among graduate students and postdoctoral fellows.

Although some business spokesmen call for more scientists, examination of the actual positions of the U.S. Chamber of Commerce and the National Association of Manufacturers reveals no push for major increases in investment for the training of scientists and engineers. Their major thrust with respect to skilled labor is to increase the number of annual H1B visas granted to foreign workers. The AFL-CIO Department of Professional Employees has noted that large increases in such visas act to lower wages for skilled labor and shrink the market for employment of U.S. citizens.
In his recent MacVicar lecture at MIT, Nobel laureate physicist Carl Weiman described the results of many years of explicit research on how college students learn – or fail to learn – physics and chemistry. Advances in education research, in cognitive psychology, and in brain science have now opened the way to better instruction in basic physics, chemistry, and math classes. We don’t need national standardized tests to improve teaching and learning in American colleges and universities. We need to implement the advances that have been identified, sharply increase student aid so that millions of high school graduates are not prevented from going on to post-secondary school education, and we need to increase the fraction of the federal budget and of the GDP that is invested in education.