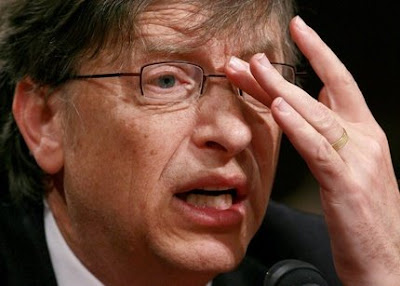 Image Source:
http://andrewsullivan.theatlantic.com/the_daily_dish/
images/gateswinmcnameegetty.jpg
If you don't think it is showtime for big business in K12 schools, you didn't read the Obama speech yesterday or notice the phony cackle of Arne Duncan as he made the talk show rounds to sell the takeover of American education by the reigning American oligarchs. The Gates-Broad-Walton Group now own the Education Department, and whether or not the President knows what is going on or whether he has used American schools as a bargaining chip to buy corporate support for policies that matter to him, is entirely irrelevant. One thing is for sure: unless teachers, parents, and students move beyond their unions and school boards and into the streets, this plan for corporate schools will sail through quicker than you can Microsoft.

Union leaders have been bought or are in denial or both. Have a look at reaction from the speech. From the AP:

. . . .We finally have an education president," said Randi Weingarten [bought], president of the 1.4 million-member American Federation of Teachers. "We really embrace the fact that he's talked about both shared responsibility and making sure there is a voice for teachers, something that was totally lacking in the last eight years."

The president of the 3.2 million-member National Education Association, Dennis van Roekel said, "President Obama always says he will do it with educators, not to them."

"That is a wonderful feeling, for the president of the United States to acknowledge and respect the professional knowledge and skills that those educators bring to every job in the school," van Roekel said.

Van Roekel [in denial] insisted that Obama's call for teacher performance pay does not necessarily mean raises or bonuses would be tied to student test scores. It could mean more pay for board-certified teachers or for those who work in high-poverty, hard-to-staff schools, he said.

However, administration officials said later they do mean higher pay based on student achievement, among other things. . . .

And yesterday Gates and Broad did some bank walking in Seattle, where they offered several million tax-deductible dollars to one of Eli's Broad's miracle admin school graduates in charge of the Seattle Schools, who last week earned new respect from the bosses by suspending those two teachers for giving attention to the wishes of parents on the testing of their children. The oligarchs will have none of that, and yesterday Goodloe-Johnson was paid off with some more dough to gather some more "data."

In a lucrative vote of confidence in Seattle Public Schools, the Bill & Melinda Gates Foundation will give the district $7.2 million over the next three years, saying it is impressed with the five-year plan developed under Superintendent Maria Goodloe-Johnson.

The grant is one of four the district plans to announce Tuesday, for a total of $9 million.

The Gates Foundation's contribution is its first major donation to the city's public schools since 2000, when it gave a five-year, $26 million grant, one of the first in its initial $350 million effort to improve the nation's schools. . . .

. . . . The Alliance for Education, a nonprofit organization that raises funds for Seattle Public Schools, will manage all four grants. The district must show progress each year in order to get the full $9 million, said President and CEO Patrick D'Amelio.

The Gates Foundation's gift also is one of the first since Phillips started working there and the foundation revamped its strategy in education giving.

The foundation still thinks that high schools should be smaller, Phillips said, but in Seattle and elsewhere, the foundation will also focus on supporting good teaching with tools, training and research.

The $7.2 million for Seattle isn't big by Gates standards, but Phillips said it is significant for a district of Seattle's size. The foundation recently gave $8 million to support data systems in the entire state of Texas.

And remember, every time the oligarchs give 3 bucks to advance their own ideological agendas, taxpapers give them back at least a dollar for being so generous. Some states like Florida have dollar for dollar tax credits, so that corporations giving to the state school voucher fund can offset up to 75% of their tax obligation. Now how sweet is that pot!
at 8:49 AM