A couple of weeks ago it was George Will parading his ignorance and arrogance in an op-ed global warming denial piece that Washington Post sloppily fact-checked. Now we have another example from last Sunday's op-ed by Jeanne Allen, the Queen of charter school disinformation.

In a piece that shamelessly uses the South Carolina girl, Ty'Sheoma Bethea, who wrote the President about her crumbling school, to blame the girl's community for not fixing the problem themselves, Allen simply lies in order to paint the school community as lazy spendthrifts, a stereotype that lives on at least in the mind of Jeanne Allen:


Dillon's per-pupil expenditure -- $8,700 -- is higher than the national average. That funds more than 50 staff positions at her J.V. Martin Junior High School (including four custodians). That's a student-to-staff ratio of 9 to 1, meaning there are more than twice as many adults serving students as at most schools in the country. What if Ty'Sheoma had an opportunity scholarship, which would send $7,500 to the private school of her family's choosing?

It is bad enough that Allen would use this child to push her own corporate welfare solutions of vouchers and charters, but to make up stuff to perpetuate a cultural stereotype is really sad. It is doubly sad that the Washington Post would allow it. The actual per pupil expenditure at J. V. Martin Jr. High School is $7,322, while the SC state average expenditure is $9,466. The national average per pupil expenditure, WaPo factcheckers, is $8,701, which makes Ty'Sheoma's school $1,379 below the national average and $2,144 below the state average. By the way, the capital expenditures at this school are $149 per child per year, compared the $1,603 state average. I haven't been able to to check out the four custodians claim yet, but there would probably be plenty of work even if it were true, since the school was built in 1912. 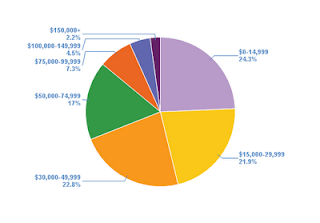 Click to enlarge. You may see at left that the community of Dillon, SC is very poor, with 46% of households making under $30K per year. Chart from School Matters