Obama to Business Roundtable: ". . . right the ship and let private enterprise do its magic" 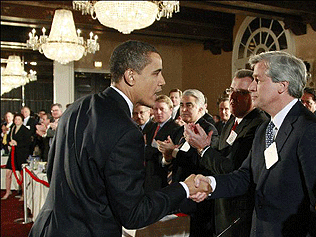 No, the New York Times won't have this story.
From the the Australian Business:

. . . .During prepared remarks and a question-and-answer session that ran longer than an hour, Mr Obama gave assurances that he wants to keep US businesses competitive with their rivals around the world, said he would soon unveil plans to boost small businesses and indicated he's willing to cut corporate tax rates as part of a deal that closes loopholes.
. . . .
Mr Obama's remarks to the roundtable addressed concerns that his agenda is overly ambitious and that it will trigger a dramatic expansion of the federal Government.

Mr Obama characterised himself as a "strong believer" in the free market, but said the Government has a role to play during periods of economic hardship.

"I think there are times where sometimes our economy gets out of balance. This is obviously one of those times," he said. "And so government has to intervene in the crisis, but the goal should always be to right the ship and let private enterprise do its magic."

But he rebuffed critics who say he's an advocate of extreme government intervention.

"I'm amused sometimes when I read sort of this talk of, well, you know, the Obama administration wants to get government into everybody's business. I don't. I want you guys to do your thing," Mr Obama said.