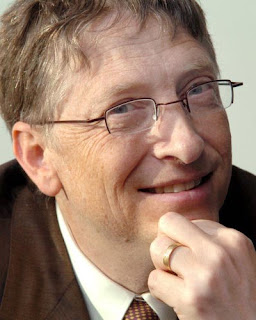 Bill Gates is too full of educational, um, wisdom not to share it with the rest of the world in every way we can. Bill has been in Washington for the past few days helping Arne write his report that the President is making him write that will serve as the blueprint for federal education policy for the next several years.

One thing we know that Bill favors is constant surveillance in the classroom via cameras and constant surveillance of teacher and student performance via longitudinal data systems. Not only are such systems good for making schools accountable for the huge bonuses paid to teachers and principals, but these systems are the backbone of the 21st Century Microsoft, er, world economy. Without further ado, Bill Gates, speaking to some of the top U. S. Government folks on March 26, 2009 (ht to Ken Libby):

Computing is like the new literacy. So, any effort you made for books and literacy, there's a parallel here. Sometimes the Internet connectivity is hard, but it's well worth the effort.

And getting teachers to use that to connect up to each other, you know, I see a scenario where a teacher with a Web cam in their class can take some 15-minute segment where they wonder, did I teach that well, did I discipline the class and keep them calm in the best way, they could simply take that clip, send it off to a group of teachers, and get feedback, you know, no, I think you should have done this or looked at how I did the same thing. And so they're building learning from each other, and that average quality is continuing to go up, you know, making it easy to measure things, making it easy to know where students are falling behind.

And to show the world how Bill's ideas take hold and how the media responds to Bill's desire to keep children "calm in the best way" and for "making it easy to measure things" through the miracle of constant video surveillance with web cams, Bill and Melinda's favorite newspaper, the Washington Post, ran a story today on how the new technology can allow children with terrible diseases access to what is going on in the classroom. The tech hookup is managed by a non-profit 501c3 in Reston, Virginia called Hopecam.

Arlington County provides Becky with an at-home tutor who helps her with schoolwork when she misses class, but the webcam fills a social void by allowing her to interact with her classmates.

"She's a very bright child" who would probably have no trouble making up for schoolwork she had missed, said her mother, Lisa Wilson. "The webcam really just adds that extra dimension that she misses."

Becky's teacher, Lainie Ortiz, said the video link is good for the other students as well.

"They can see that she's okay. It's great for them," Ortiz said. When Becky calls in, the other students run up to the computer to greet her.

The camera in the classroom is set up so Becky has full view of all her classmates and the teacher. "It's like I'm there," Becky said.

Oh, by the way, this piece was prepared by Sindya Bhanoo, who "covers health and technology for The Industry Standard [a leading computer industry news source] and contributes to The Washington Post's health desk," but this special piece, which just coincidentally just coincides with Bill's push for computer surveillance in the classroom and his recent visit with the Editorial Board, appears in the education section of WaPo.
at 9:00 AM