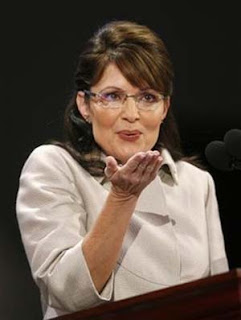 Give those, ya know, poor kids an inch, and by golly the next thing ya' know, ya' know, is they'll want a hot lunch, or somethin' else equally ridiculous.

From the Anchorage Daily News:

Their reactions to Palin's decision have ranged from dismay to panic, superintendents said Thursday.

Much of the stimulus package money for education -- about $74 million -- was designated for poor schools and special-needs kids. It was to be spent over the next two academic years.

Most of the other money is meant to help prevent cuts to classrooms, staff and critical services.

"This is the kids' money, not our money," said Lower Yukon superintendent John Lamont.

Many of the state's 53 superintendents are drafting a joint letter to the Legislature, asking lawmakers to override Palin and accept the money, Lamont said.

"Even if it was a two-year package, our students are in dire need," he said.

Lamont's district, which is spread over 22,000 square miles in Western Alaska, has a dropout rate that is more than twice the national average. He had planned to use the $2.2 million he thought his district was getting to hire math and reading specialists.

The news may have come as more of a surprise because the state Department of Education held a teleconference with superintendents this week about the stimulus funding. Superintendents were given estimates of how much they would be receiving, for at least some portions of the money. They were told the governor had some reservations about the money and didn't want frivolous spending, but not that Palin might turn away all the school money, said Kenai Peninsula Borough Schools assistant superintendent Steve Atwater.

Nancy Wagner, superintendent of the Fairbanks North Star Borough School District, said the federal money could pay for things the district will eventually have to spend money on anyway, like training or materials.

"We wouldn't want to commit to something that we know we couldn't sustain ... it would free up some funding for us to use later," she said.. . . .