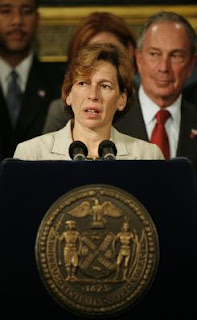 No caption is required for this photo. Worth a thousand words? Every bit. (By Yanina Manolova, AP)

Matt Taibbi, in Rolling Stone, has the history of Wall Street's string of market manipulations from the 1930s to today. No, there are no hired czars to mete out punishment for the "misconduct" that created misery on a colossal scale for hundreds of millions of people, and there was, nor is, no orchestrated media campaign to publicize it, as there was yesterday when Bloomberg's Federation of Teachers President, Randi Weingarten, offered her bold new oligarch-approved plan to make teachers pay for the malignant neglect of poverty, apartheid, and the education debt to the poor that remains unpaid.

Bob Herbert for the NYTimes and Kaplan stooge, Jay Mathews, for WaPo had opinion boosters in print before Weingarten could unfold her speech, and Nick Anderson had a glowing report beforehand that could find no one in disagreement with Randi's visionary capitulation. And so did Greg Toppo for USA Today, who could not wait until the speech was given to report the historic event.
at 7:05 AM