Philanthrocapitalists Go Hollywood With Production of "Waiting for Superman" 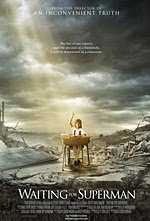 As a not-so-subtle, though unconscious?, reference to the good ole' days that led up to the rise of national socialism, the new documentary, Waiting for Superman, features a number of Superman wannabes, including KIPP cult leaders Feinberg and Levin, Michelle Rhee, Bill Gates and Eli Broad's boy, Steve Barr. And how well the film's poster inadvertently captures the venture philanthropists' self-imposed blindness to America's urban devastation in favor of a more lucrative focus on producing white-like compliant children whose psychological bubbles are bathed in a sweet incandescence from above that is worthy of a Microsoft ad. Nothing can stop you, boys and girls, if we can find the right superman to inspire you and to get your mind right. Onward, positive psychology soldiers!

Prior to Participant, Jim was Chairman and CEO of Gryphon Colleges Corporation, where he was responsible for the formation, platform acquisition and establishment of a private company operating for-profit post education schools.

At the Waiting for Superman website, here are the ways that are bulleted for you, the wet-eyed movie watcher, to get involved to make it all better for the poor children in the penal pedagogy urban schools. The list ranges from giving pencils to the poor to book donations to joining the PTA (a favorite of Bill Gates who has given generously to PTA) to visiting Arne Duncan's propaganda site (#4):
There is nothing here about electing politicians whose education positions are not written by the Business Roundtable or about advocating for rebuilding our public education system, or for fighting to integrate our schools, or for rebuilding our rotting physical plants, or encouraging and rewarding our teachers, or for ending the genocide of testing and containment.

. . . .The new film, developed, financed and executive produced by Participant Media, examines the crisis of public education in the United States through multiple interlocking stories – from a handful of students and their families whose futures hang in the balance, to the educators and reformers trying to find real and lasting solutions within a dysfunctional system.

Said Paramount's Goodman: "Our commitment to this movie and the issue of education is urgently important to all of us at Paramount. In collaboration with our partners, we hope to bring about a real solution."

Said Davis Guggenheim: "With these two great partners, Participant Media and Paramount Pictures, we have a chance to create public awareness around this issue, and this is the only way we can make real change in our children's schools."

Said Jim Berk, CEO, Participant Media: "The movie creates an emotional personal connection to an issue which underpins the very future of our country. . . .

Yes, the very future that is waiting for the children of the poor who make it through the testing and containment camps that the Supermen want to manage--at public expense, of course:

SAN FRANCISCO -- Gryphon Investors announced today that it has completed the acquisition of Delta Educational Systems (Delta) through Gryphon's post-secondary education platform, Gryphon Colleges Corporation (GCC). Terms of the deal were not disclosed.

Gryphon Colleges Corporation was formed at the end of 2004 by Gryphon Investors through the acquisition of National Career Education (NCE), a four campus school company located in Arizona and California. . . .