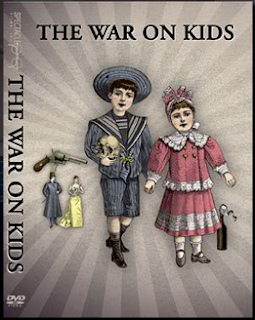 If you have not seen The War on Kids, please do. It would make a great centerpiece for a PTO meeting or a professional development day. I would hope that every school kid and parent see it and every health care professional. Also, I would highly recommend it for Gary Bingham and the other embarrassments on the Mesquite school board.

HOUSTON — A suburban Dallas school district has suspended a 4-year-old from his prekindergarten class because he wears his hair too long and does not want his parents to cut it.

The boy, Taylor Pugh, says he likes his hair long and curly. But on Monday night, the school board in Mesquite voted unanimously to enforce its ban on Beatles haircuts, much less anything approaching coiffures of bands like Led Zeppelin. School officials say the district’s dress code serves to limit distractions in the classroom.

No exception could be made for the pint-size rebel, who sat through the hearing with his hair in a ponytail, manifestly bored.

“It’s a trade-off,” said one board member, Gary Bingham, an insurance agent, in an interview. “Do the parents value his education more than they value a 4-year-old’s decision to make his own grooming choices?”

The boy’s parents, Delton Pugh and Elizabeth Taylor, have argued that it is unfair to punish Taylor for his longish locks; it suggests, they say, that the district cares more about appearances than education.

“I don’t think it’s right to hold a child down and force him to do something,” Mr. Pugh, a tattoo artist, told The Associated Press. “It’s not hurting him or affecting his education.”

The parents rejected a compromise proposed by the board under which they would braid his hair and pin it up.

Since Nov. 24, when his principal decreed that Taylor’s hair had grown too long, the boy has been sent to the library to study alone with a teacher’s aide. “They kicked me out of that place,” Taylor told a reporter on Dec. 17. “I miss my friends.”

Can someone tell me what a 4-year old "studies?"

His parents plan to appeal the school board ruling to the state education commissioner. In the meantime, school officials said they would continue to separate Taylor from other children.