KIPP and the Science of Psychological Neutering

KIPP-notizing is a core component of training within the KIPP total compliance sects. The first big dose occurs in the three week summer sessions that KIPPsters must attend to get them ready for initial entry or for the next grade up within the sect. From a Washington Post article (August 24, 20005) that is no longer available from their website. Hmm:


Mornings at the summer program at one of the District's newest public charter schools typically began with the principal, Khala Johnson, striding down the aisles between tables in the cafeteria/auditorium/gym commanding the students to get funky. "Give me a beat!" she shouted, her shoulder-length dreadlocks shaking.

It's called "KIPPnotizing" -- what officials at KIPP DC: AIM Academy say is their way of indoctrinating students into a culture of high expectations.

KIPP (Knowledge Is Power Program) is a network of free, open-enrollment, college-preparatory public schools in under-resourced communities throughout the country.

Another part of KIPP-notizing that the Post's Jay Mathews doesn't talk about is the constant monitoring and correction for the slightest rule infringement during KIPP-notizing, the constant surveillance and certain punishment that a part of every 9-10 hour day. This is a part of breaking children down into small puddles of compliance, and it is inspired by Dr. Martin Seligman's research on learned helplessness. From the Encyclopedia of Childhood and Adolescence:

The concept of learned helplessness was developed in the 1960s and 1970s by Martin Seligman (1942- ) at the University of Pennsylvania. He found that animals receiving electric shocks, which they had no ability to prevent or avoid, were unable to act in subsequent situations where avoidance or escape was possible. Extending the ramifications of these findings to humans, Seligman and his colleagues found that human motivation to initiate responses is also undermined by a lack of control over one's surroundings. Further research has shown that learned helplessness disrupts normal development and learning and leads to emotional disturbances, especially depression.

Visitors to KIPP schools are always impressed by children who continue to work, with or without their teachers in the room. To counter the depression among KIPPsters that results from doses of learned helplessness, Dr. Seligman and his disciples inject intermittent treatments of "learned optimism" between the reading and the math, and the math and the reading. Thus, the chanting and the clapping that we see in the 2005 WaPo piece. 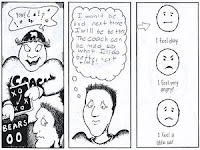 Now in 2010 the UPenn disciples of Seligman like Dr. Jane Gillham have an entire research program devoted to these psychological techniques, and KIPPsters, in their urban containment camps of corporate colonialism, are their chief guinea pigs--all, of course, with the blessing of Levin and Feinberg. No longer is there just a never-ending supply of reading and math worksheets, but now there are "thought-emotion" worksheets that can be used in the few moments between math test prep and reading test prep.

In the cartoon (click it to enlarge), KIPPsters see a student faced with an angry coach. We may think of the sadists who ran KIPP Fresno, where the principal screamed at children all day, or when he no longer wanted to scream at them, made them stand outside in the sun all day. Now instead o feeling angry or sad, students learn that they can feel "okay." They just need to work harder and be nicer, and maybe the "coach" will stop being a sadist. The most insidious part of this brainwashing technique, of course, is that the screaming, berating, and constant monitoring never stops, regardless of how much KIPPsters work hard and be nice. And that becomes the fault of the child, who just isn't trying hard enough.

We can only imagine how the 50-60 percent of KIPP washouts feel about themselves and their failure to measure up to the KIPP standard. We can only imagine, too, how unprepared KIPP graduates are beyond test-taking skills, out there in the non-apartheid world where there is no constant monitoring to make sure that work gets done. These adults must surely miss that constant surveillance. Ah, the good ole days.

And, surely, we must imagine how these psychological tactics get translated in the KIPP knock-offs where untrained and uncertified teachers in the corporate charter chains turn these brainwashing experiments into sadistic excess. Welcome to the future of urban penal pedagogy.

Here is a clip from a recent and enthused NPR story on this new and accepted practice of psychological neutering of urban children:

. . . ."It's not just about telling yourself positive things over and over," says Gillham. That could be delusional. "It's reality-based," she says. Gillham says there are other strategies, too. She wants kids to learn to take a step back and reflect before reacting to disappointing events.

Bryce says he's really trying to use what he's learned. "It's come in handy when I get mad," he says. A few weeks ago he was furious with his sister when he came home from school and found his video game on the floor, broken.

But before he started a fight, he took a deep breath. "I went into the bathroom, and I looked into the mirror and calmed myself down," says Bryce.

Gillham says this is a great example of a kid learning to be more emotionally resilient. "That's really what we hope for, is that kids will internalize the skills enough that they can use them in the moment," she says.. . .

So, boys and girls, don't think about resisting your oppressors or changing your rotted communities. And instead of getting sad or angry, reflect and become emotionally resilient. Work hard, be nice, and you are sure to stay out of trouble. And if you get in trouble, just reflect on what you did to get yourself there. When you get out, we'll all meet up at the Chestnut Street Cafe.