Saving 300,000 Teaching Jobs Equal to 2 Months of War Expenses in Iraq and Afghanistan 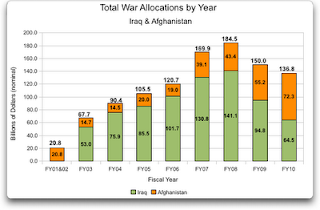 When the Wall Street bankster scheme was finally discovered in late 2008, the Feds under Bush rushed in $700 billion to rescue the the same fraudulent banks, insurance companies, and "lenders" that stole the money.

Tom Harkin is now begging the Republicans to go along with a rescue effort to provide $23 billion to save up to 300,000 teaching jobs next year from being cut, cuts that would represent yet another legacy of the bankster heist from 2008. If we were to become so generous as to pay out to teachers that $23 billion per year, it would take over 43 years to spend as much as we have spent so far for killing in Iraq and Afghanistan.

Here is a nice post on the subject of teacher assistance by Steve Benen at Washinton Monthly:

"The American people recognize that Washington's out-of-control spending is hurting our economy and stifling job creation, and they're asking their elected leaders to make tough choices on fiscal responsibility. Unfortunately, the Administration's call for another $23 billion to pad the education bureaucracy will only make state governments more dependent on the federal government and more vulnerable when the federal funding explosion disappears. [...]

"Giving states another $23 billion in federal education money simply throws more money into taxpayer-funded bailouts when we should be discussing why we aren't seeing the results we need from the billions in federal dollars that are already being spent."

Whether Boehner actually believes his own press releases is a matter worthy of debate, but either way, his arguments seem oddly detached from reality. Spending is "hurting our economy and stifling job creation"? In Grown-Up Land, spending rescued the economy and generated the strongest job creation in years.

Just as importantly, what does Boehner think the economic impact will be if 300,000 school teachers are forced from their jobs nationwide?

Of course, notice Boehner's emphasis on this being a "bailout" -- a line Fox News is running with. As Republicans see it, emergency aid to prevent teacher layoffs must necessarily be connected in the public's mind with rescuing Wall Street with TARP.

Doug Thornell, a spokesperson for DCCC Chairman Chris Van Hollen (D-Md.), said in a statement, "Yesterday, job-killing House Republicans blocked a bipartisan plan that would help get more Americans back to work. Today, it appears John Boehner and House Republicans want to stand in the way of important funds that would help save teachers' jobs. It is unbelievable that John Boehner, who begged his Conference to support Bush's bailout of Wall Street banks, has the nerve to use teachers and children as pawns in his cynical game to regain the trust of the right wing of his party."

Well, perhaps "unbelievable" is the wrong word -- it's actually sadly predictable -- but the rest of Thornell's sentiment sounds about right.