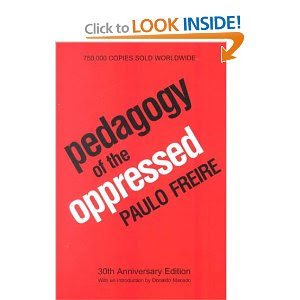 The latest bout of virulent racism at the state level in Arizona features, of all people, Arizona's state superintendent of public instruction. Tom Horne (R), who is running for state attorney general, is all about banning ethnic studies courses, except, of course, the white studies course that is sold across the U. S. as American History.

In so doing, Horne is focused on atomizing any constituency that could coalesce to challenge white Republican rule in Arizona, and in the process, he seems intent also upon arresting any book that may be deemed appropriate to encourage people to live as authentic human beings and to participate actively in shaping their own lives. From the New York Times:

. . . . The new law, which takes effect at the end of the year, is a victory for Tom Horne, the state superintendent of public instruction, who has fought for years to end Tucson’s ethnic studies programs, which he believes teach students to feel oppressed and resent whites.

“The most offensive thing to me, fundamentally, is dividing kids by race,” Mr. Horne said.

“They are teaching a radical ideology in Raza, including that Arizona and other states were stolen from Mexico and should be given back,” he continued, referring to the Mexican-American studies classes. “My point of view is that these kids’ parents and grandparents came, mostly legally, because this is the land of opportunity, and we should teach them that if they work hard, they can accomplish anything.”

Mr. Horne, a Republican who is running for state attorney general, said he also objected to the textbook “Pedagogy of the Oppressed” by Paulo Freire.

The schools in Tucson, where about 56 percent of the students are Hispanic, offer Mexican-American studies classes in history and literature and African-American literature classes. Although the classes are open to all students, most of those who enroll are members of the ethnic or racial group being discussed.

In June 2007, in an open letter to the residents of Tucson, Mr. Horne said, “The evidence is overwhelming that ethnic studies in the Tucson Unified School District teaches a kind of destructive ethnic chauvinism that the citizens of Tucson should no longer tolerate.”

In that letter, he said he believed that students were learning hostility from La Raza teachers, citing an incident in which students at the Tucson High Magnet School walked out on a speech by his deputy, a Republican Latina, who was trying to refute an earlier speaker who had told the student body that Republicans hate Latinos.

Sean Arce, director of Tucson’s Mexican-American studies department, said the ethnic studies courses do teach students about the marginalization of different groups in the United States through history.

“They don’t teach resentment or hostility, in any way, shape or form,” Mr. Arce said. “Instead, they build cultural bridges of understanding, and teach the skills students need to understand history.”

Furthermore, Mr. Arce said, the ethnic studies courses have been highly effective in reducing students’ dropout rates and increasing their college matriculation well above the national average for Latino students.

Mr. Arce and Ms. Burns said that they had repeatedly invited Mr. Horne to visit the ethnic studies classes, but that he had declined the invitations.

Mr. Horne acknowledged that he had never sat in on a class, but said he did not believe that what he would see would be representative of what regularly took place.

Sorry, Tom, you're too late to turn back history. You have poked your big stupid finger into a hornet's nest, and you are about to get stung--big time. See Democracy Now interview below with two very determined Latinas who are representative of millions of others who are not intimidated by racist political opportunists like Tom Horne.