Education is ground zero in the systemic exploitation of black people in New Orleans--ground zero because public schools are the direct feeder for the necessary, albeit unskilled, labor needed for the tourist-oriented economy. . . . In New Orleans they are building more hotels every day.  Where will the bellhops and maids come from? . . . . Our schools are the way they are because the economy. . . continues to require a labor force to clean, cook, and serve.
--Kalamu ya Salaam, quoted by Buras, 2010, pp. 66-67

In December 2010, the Southern Poverty Law Center released a report filled with grisly and harrowing details of student abuse, miseducation, segregation, and exclusion in the schools of New Orleans.  The first paragraph:

New Orleans students are supposed to be learning in one of the most advanced, innovative educational environments in the country. When it comes to school safety and security, however, many New Orleans schools employ ineffective discipline practices that were discredited by education policy researchers decades ago. School staff react to minor rule violations by forcibly handcuffing children to furniture, brutally slamming them, banishing them from their schools and cutting short their education. Far from keeping New Orleans schools safe, these policies actually reinforce a culture of violence and disengagement from schools and communities.

What has emerged since Katrina wiped out New Orleans Schools is the quintessential corporate education model, with corporate charter schools now constituting 3 out of every four schools in the Big Easy.  This system based on the "portfolio model" was developed under the leadership of Paul Vallas, who became the highest paid superintendent in Louisiana history (over $400,000 annually) at at time when large numbers of children in New Orleans did not have textbooks and teachers bought their own chalk.

While Vallas and his toadies claimed the new charter system was open to all comers, what quickly emerged was a school caste system, with the poorest and neediest children shut out of schools where their test scores could damage the charter brands that were set up as the urban model for the nation.  A clip from an article that appeared in the Harvard Education Review, Summer 2011, by Kristen Buras (click on clip to enlarge): 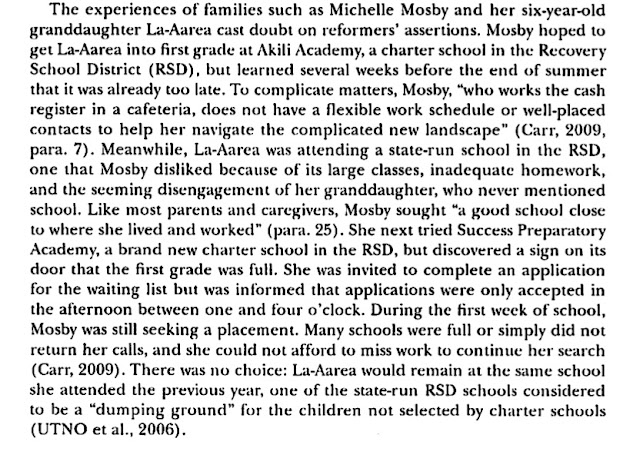 RSD stands for Recovery School District, and this lower caste of NOLA schools has its own internal caste system as well.  There are the charters and the publics within RSD, with the regular public schools left to take those that even the RSD charters don't want.  A number of these regular public schools will continue to operate, as they are necessary dumping grounds for children who have special needs, lower test performance, or are resistant to the total compliance instructional regime that is based more on behavioral modification and test prep.  The children of these schools of last resort will be contained and miseducated until they can be driven out of school entirely and into the Louisiana correctional facilities.

With these kinds of problems remaining for a system that touts itself as the urban solution to schooling in America, it is disturbing, though not surprising, to see the New York Times come out strong for such an obviously unfair, unethical, exploitative, and oppressive system, without ever mentioning any of the glaring inequities or crimes being committed against children.  Brent Staples as Editorial Board ed guy has always been a reliable rubber stamp for corporate ed reform, but really?  Is this what the New York Times endorses?

Staples' latest press release for corporate ed reform shows up today in today's Sunday edition as its lead editorial, and it begins with a whopper of a lie:


Before Hurricane Katrina, more than 60 percent of children in New Orleans attended a failing school. Now, only about 18 percent do.

Prior to Katrina's wipeout, the New Orleans Schools reflected decades of malignant neglect, having been left to the African-American population and vastly underfunded after Southern desegregation took hold following Brown v Board of Education.  The white folks simply left the public schools.

The New Orleans public schools, however, were beginning to make strides before Katrina.  Yes, 60 percent were deemed AUS (Academically Unacceptable Schools), but just before Katrina, the State ranked Orleans School District 11th out of 68 districts in terms of annual achievement growth, even though the district remained at the bottom of the barrel in terms of raw scores on the LEAP test.

As for Staples' other claim that 18 percent of kids now attend an AUS school now in New Orleans, that's a magical number--pure fabrication.  The State of Louisiana's Preliminary 2009-2010 Academically Unacceptable List lists 22 New Orleans schools.  Using state data here, I was able to find 5 other New Orleans schools that were also AUS, for a total of 27 schools.  That would be almost 31 percent AUS, but there is a further complication.

Now consider the fact that the corporate-friendly Cowen Institute at Tulane reports [download the report here] that there were 17 schools without data to tell us whether they are acceptable or unacceptable.  So when we divide that 27 schools we know are AUS by the number of schools for which we have data, we get 38 percent as the real percentage of AUS schools in New Orleans.  How Staples got 18 percent, we will never know.  Did he divide the real number in half and add 1?  Or did he just take the purely fabricated number handed to him as truth?

That 38 percent AUS number would still be impressive, were it not for the fact that the corporate ed reformers in New Orleans have contained and segregated the majority of poor test scorers in a handful of schools and then declared the rest superior.  But then selling the charter bill of goods is no different than any other corrupt deal put together by amoral corporate interests with no concern for the well-being of the 99 percent.