Join In and Opt Out: Become a Difference That Makes A Difference 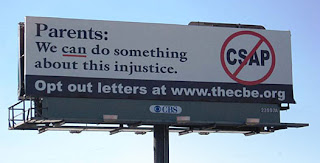 The last hundred years of rewarding test scores based on social class and economic privilege and calling it objectivity, science, or meritocracy has been brought into stark relief against the reality of hungry children living in cars during the not-so-great Depression we are now living through.

Sadly, the next generation of value-added testing is just another expample of doing the same thing and pretending to expect different results (I guess Einstein might call it hypocritical insanity).  In fact, all the "growth modeling" that has been paraded about for the past 25 years effectively makes poverty even more invisible than it is now by ignoring the tremendous learning deficits that children develop as a result of poverty even before they reach school age.

When parents and teachers and principals join forces to build humane and effective learning environments in schools that prepare children to survive and flourish in the most challenging world ever known to human civilization, things will change.

Go to these websites and begin to learn how you can begin the new year with positive actions that will make real differences in the making better schools for a better world.

United Out Out National: The Movement to End Punitive Public School Testing

Save Our Schools: Putting the Public Back In Public Schools

Email ThisBlogThis!Share to TwitterShare to FacebookShare to Pinterest
Labels: opt-out, political action, save our schools