Sherman Alexie "Arizona has made our books sacred documents now."

"A deepened consciousness of their situation leads people to apprehend that situation as an historical reality susceptible to transformation." — Paulo Freire 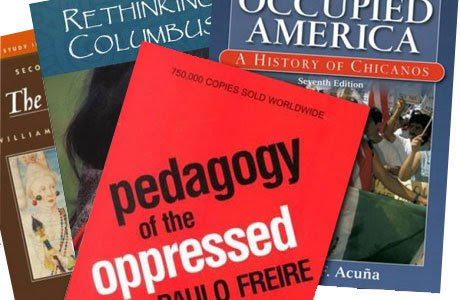 The Progressive has been compiling the responses of authors whose books were banned by Arizona bigots and arch-reactionaries Tom Horne and John Huppenthal's racist HB 2281, which, among other things, banned Ethnic Studies in Arizona schools. Of course Huppenthal and Horne's vicious legislative colonization didn't actually ban ethnic studies, it just limited Arizona's curriculum to the oppressive historical narrative of "wealthy white male studies."

Today former Schools Matter contributor Kenneth Libby tweeted the response from author Sherman Alexie, which is among the most brilliant I've seen in response to the cultural sterilization and oppression that is Arizona's pogrom against brown peoples:

Let's get one thing out of the way: Mexican immigration is an oxymoron. Mexicans are indigenous. So, in a strange way, I'm pleased that the racist folks of Arizona have officially declared, in banning me alongside Urrea, Baca, and Castillo, that their anti-immigration laws are also anti-Indian. I'm also strangely pleased that the folks of Arizona have officially announced their fear of an educated underclass. You give those brown kids some books about brown folks and what happens? Those brown kids change the world. In the effort to vanish our books, Arizona has actually given them enormous power. Arizona has made our books sacred documents now.

Sherman Alexie is a poet, short story writer, novelist, and filmmaker. His book "The Lone Ranger and Tonto's Fist Fight in Heaven," was on the banned curriculum of the Mexican American Studies Program.