Backed into a corner by a monster it helped create, LAUSD fights back against charter colocation greed

Although the bungalows are used for after school programs, art classes, festivals and special education speech therapy space, according to the number of enrolled students at Micheltorena, the bungalows have been deemed empty and available for tenancy by any charter that requests them. — Lulu Wilson 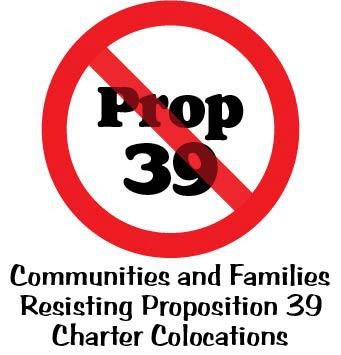 This is in response to the California Charter Schools Association's recent overreach in which they were able to obtain yet another privatization friendly court ruling that allows privately managed charter corporations to norm their classrooms as low as ten students per teacher, meanwhile LAUSD public schools "are crammed with about 50 students" in some classes. Of course, Howard Blume's biased article leaves this (and many other facts) out entirely. Cheryl Ortega was kind enough to address this issue:

The article also fails to mention the issue of smaller norming and how that could affect the home school. The issue of not counting the set asides has been the practice, if not the policy, since the inception of prop 39 in LAUSD.

Green's ruling will result in neighborhood children being displaced from their own schools and a further marginalization of children with special needs. Of course, we already know the charter school industry serves fewer students with disabilities to begin with, so it's no surprise that charters don't mind displacing those children from public schools either.

I left the following comments on The Times site:

These privately managed charters only care about their revenue streams. Displacing services, or even students from their own neighborhood schools, means nothing to the wealthy executives at the California Charter Schools Association (CCSA), which continues to pull in tens of millions of dollars from right wing organizations like the Walton Family Foundation.

Meanwhile public school children are being crammed into smaller and smaller spaces, with less and less resources! The CCSA is on record for not caring about "severely disabled students, parent centers and computer labs." Californians were tricked by Prop 39, and now the fruits of that deception are coming to the fore.

Social Justice activists have fought against this charter colocation greed in communities like Echo Park and Silver Lake. What we need is create a large community push-back against the deep pocketed CCSA in every neighborhood. Any organization or law that puts revenues and executive salaries ahead of the needs of children and communities has to go!

I am proud to have been one of the community organizers who, alongside activists like educator Cheryl Ortega and many public school parents, have fought the occupations of our public schools by capricious corporate charter schools in the 90026 zip code. We exposed the illegal incursions by the Gabriella Charter Corporation and were able to convince the Silver Lake Neighborhood Council to vote against colocation by CWC Charter Corporation. We started a facebook support group for people struggling against heavy handed charters ruining their public schools called Communities & Families Resisting Proposition 39 Charter Colocations, please feel free to join.

Given the unlimited amounts of money the charter school industry has access to, it will always be an uphill struggle to battle against their efforts to undermine public education. That said, we must resist, and it's good sign to see that a school district and Superintendent renowned for kowtowing to the corporate charter sector, are, by necessity, beginning to fight back against the tide of neoliberalism and school privatization.

A reader emailed me the following yesterday. It explains a lot more about the corporate judge mentioned above.

Judge Terry A. Green, the one who ruled that charter school students have more rights than public school students, is a long time right-wing Republican donor who has given to fringe organizations like Economic Liberty PAC as well as the Bush-Cheney campaigns, the Republic National Committee, John McCain, the California Republican Party, and others like Congressman James Rogan and Senator-wannabe Bill Jones.

Go to the link and look for Terry A. Green from CA/Pasadena to see. Sometimes he is listed as Honorable Terry Green and the Superior Court is listed. http://query.nictusa.com/cgi-bin/qind/

In fact, he donated $500 to the Republican National Committee just 8 months ago, perhaps after reading the party platform on charter school/school choice expansion. http://tinyurl.com/d4uztel

Shouldn't a judge who donates thousands of dollars to organizations and individuals who blindly support charter schools recuse himself from these cases? Instead, he rules for—surprise—the CCSA!