Obscuring history and human agency through NCLB, RTTT and CCSS 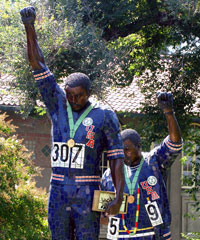 The Smith and Carlos Statue
at San José State University
I was reading Dave Zirin's latest piece, Fists of Freedom: An Olympic Story Not Taught in School, this morning and several things stood out and had me thinking in terms of how Common Core State Standards (CCSS) and its related high-stakes testing regimes not only distort curriculum, but how they are intended to distort students' consciousness of their reality.

It was probably Zirin's mention of the testing-industrial-complex conglomerates Pearson and Prentice Hall in his first paragraph that had me thinking of the article from a perspective of the damage Corporate Core Standards are poised to inflict on working class children. Zirin points out that entire history and context that are associated with the iconic image of Tommie Smith and John Carlos raising their fists at the 1968 Olympics in Mexico City is completely lost in the corporate account of the photo and the period. Also absent from the curriculum published by the profitable firm best known for Pineapplegate is an explanation of white supremacist Avery Brundage's kowtowing to Hitler in 1936.

Zirin proceeds to fill in all the details and context missing from Pearson's corporate account in a way that will frighten StudentsFirst's David Coleman since it exposes power inequalities and racism at every level of society. As in the case of Texas textbooks, this is the kind of history that Corporate Core Standards is trying to obscure, distort, and deny at every turn.

The essay ends with:

The story of Tommie Smith and John Carlos at the 1968 Olympics deserves more than a visual sound bite in a quickie textbook section on "Black Power." As the Zinn Education Project points out in its "If We Knew Our History" series, this is one of many examples of the missing and distorted history in school, which turns the curriculum into a checklist of famous names and dates. When we introduce students to the story of Smith and Carlos' defiant gesture, we can offer a rich context of activism, courage, and solidarity that breathes life into the study of history—and the long struggle for racial equality.

Several very important points here. First Zirin cites "many examples of the missing and distorted history in school," which of course, is by design. Our oppressors not only don't want young people to learn specific ideas and examples of struggle, they especially don't want students to draw the conclusion that they can actually change their reality through struggle. Instead students should become depositories for what Bill Gates, Arne Duncan, and David Coleman feel prepares them "college and career" (read low paying service sector jobs). Never let students begin to engage in critical thinking since that might allow them draw their own conclusions of society, or worse, try to address systemic problems. Confer:

It is not surprising that the banking concept of education regards men as adaptable, manageable beings. The more students work at storing the deposits entrusted to them, the less they develop the critical consciousness which would result from their intervention in the world as transformers of that world. The more completely they accept the passive role imposed on them, the more they tend simply to adapt to the world as it is and to the fragmented view of reality deposited in them. — Paulo Freire (Pedagogy of the Oppressed)

Keeping the history of struggle away from the most oppressed in society is of paramount importance to the billionaires, profiteers, and racist politicians pushing school privatization via charters and vouchers. We see examples of this everywhere. From the Knowledge is Power Program (KIPP) Corporate Charter chain denying African American students their history and culture, to Michael Hicks, Tom Horne, or John Huppenthal's book burnings banning in Arizona, to the Partnership for Los Angeles Schools (PLAS) removing access to ethnic studies and heritage language programs for impoverished students of color, there's a deliberate effort on the part of the corporate education reform junta to prevent teaching critical thinking in lieu of memorization of material for standardized tests.

Zirin then mentions that shrinking curriculums, epitomized by CCSS, "turns the curriculum into a checklist of famous names and dates." Putting aside the glaring fact that this again speaks precisely to the banking concept of education aforementioned, CCSS and its attendant testing regime have all but enshrined the "Great Man Theory" of history. This isn't surprising given the extremely high opinion Eli Broad, Bill Gates, Reed Hastings, and all the other corporate education reform billionaires hold of themselves. Much of corporate education reform, including the idea that market concepts like competition will improve education, are a reflection of its proponents' extreme narcissism.

Common Core State Standards, like all the other components of corporate education reform, are an antithesis of social justice. Reducing students to repositories of information deemed important by David Coleman is part and parcel the banking system of education. Instead of teaching students what they need to liberate themselves, Corporate Core Standards were designed to insure passivity and compliance. We must resist the real "status quo" of arbitrary standards and high-stakes standardized tests by every means possible. We must use Smith and Carlos' example of resistance not as something to regurgitate on a Scantron form, but as something we must do ourselves.