When I taught in the Los Angeles Unified Schools, I openly opposed the Vietnam War and was critical of the system’s race policies.  Fortunately, I was never threatened with dismissal, I belonged to a union. — Professor Rodolfo F. Acuña 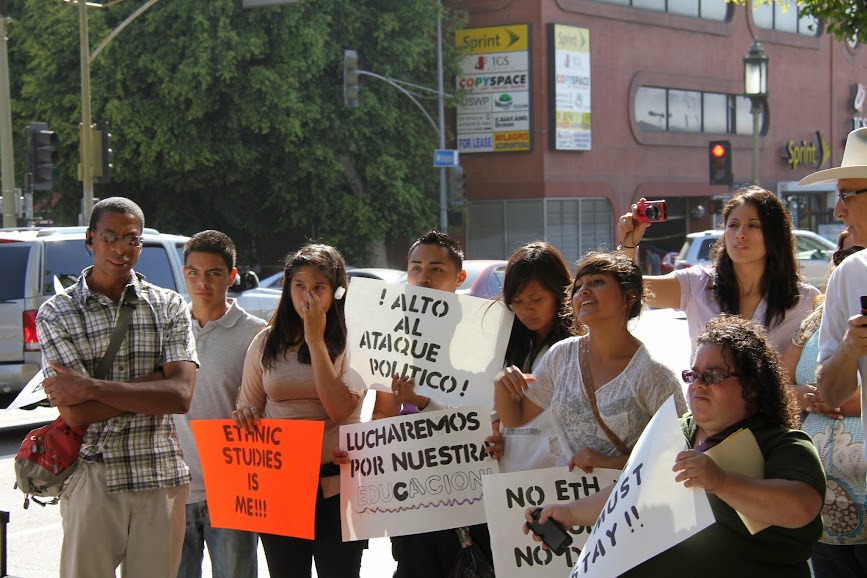 Eli Broad's California State Superintendent of Public Instruction hopeful, corporate banker Marshall Tuck, has a long history of fostering institutional racism. It's well documented that he closed down Ethnic Studies Programs, Heritage Language Academic Programs, and research proven Dual Language Immersion Programs. It's also documented that he has been willing to target teachers of color who get too "uppity" for him and the wealthy white elite he works for.

As a white male myself, I cannot speak on behalf of oppressed students and faculty who suffered under Tuck's racist leadership. However, as a student of Freire, a founding member of the Southern California Immigration Coalition, and a member of many groups that are led by various Central American, South American, and Indigenous Peoples, I have had a lot of exposure to the concepts of colonialism and institutional racism. I was endorsed by both Unión del Barrio and Association of Raza Educators (ARE) Los Angeles during my school board run for a reason. It is my moral and intellectual responsibility as a scholar and an activist to challenge white supremacy at every opportunity.

So imagine my surprise when wealthy white Hollywood actor Dax Shepard (I didn't know who he was until I checked Wikipedia) decided he needed to 'splain me about racism and such. I was able to preserve this one exchange, but unfortunately he deleted the rest of the conversation. He had seen the title of my carefully researched polemic Marshall Tuck's Legacy of Bigotry and Failure and said I couldn't be more wrong on the bigotry thing. I responded by asking for an explanation of that stance in the light of Tuck's abject record:

@daxshepard1 Deliberately taking down all the bilingual signage at schools with monolingual Spanish parents isn't bigotry?

Finally I asked Shepard directly about his personal beliefs on culturally appropriate pedagogy:

@daxshepard1 I'm asking the wrong question. Do you support providing students of color access to classes about their cultures and history?

To which he replied (I'm paraphrasing since he deleted his tweet): "Given a choice I believe math and science are more important." To which I responded with an excerpt from Cheryl Ortega's powerful narrative within the Tuck piece:

@daxshepard1 At the end of the day this is racist and ethnocentric. Your friend did this, he can't hide from it. pic.twitter.com/nhzhYMSWEK

Shepard's response is nothing short of breathtaking:

@rdsathene I can't think of anything more irresponsible than the way you are using the word "racist." It undermines real racism.

I know he probably didn't realize what he was saying, but let's be clear — I want to undermine all forms racism, including what Shepard believes is the "real" kind. For a white male to deny that oppressions like cultural sterilization, colonialism, and denial of language rights are forms of "real racism" is not unlike males that have taken upon themselves to define what "real rape" is. Colorado activist and former Denver Board of Education member Andrea Mérida spoke some serious truth to Shepard's white power.

@daxshepard1 @rdsathene Ever experience it yourself? No? Then you don't get to define it. Ever hear of institutional racism?

We need more people like Merida calling this out for what it is. While the cartoonish racism of buffoons like Donald Sterling dominates the headlines, the more subtle, insidious racism of Tuck and Shepard pervades our society. In the case of Tuck, it become the established institutional kind that corrodes students of color from the inside out. We can only hope that his billionaire backers don't get him elected, because we've already seen what Tuck's type do when in power — just look at Arizona! 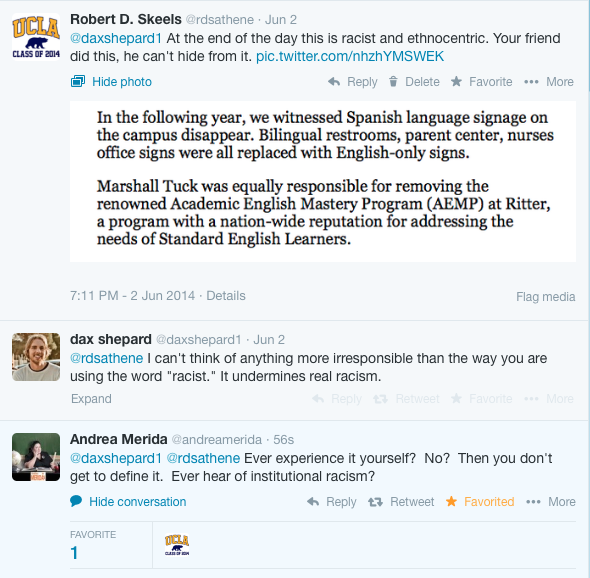