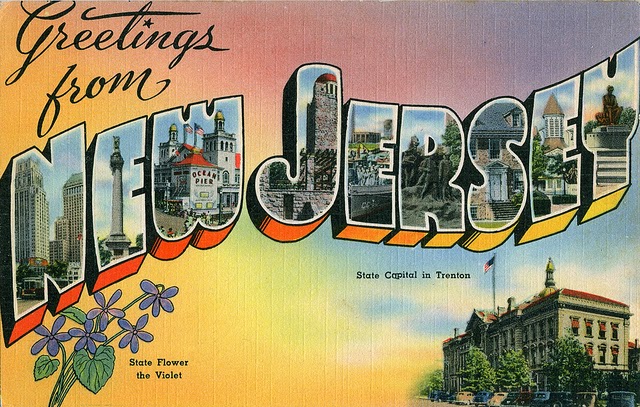 This didn't happen by osmosis. It happened because parents, teachers, administrators and citizens in New Jersey have been lobbying their local representatives to end the damage being done to their
children by high stakes testing that is abusive and punitive for teachers, schools and communities.
The people of New Jersey have had enough of Governor Christie and Common Core Standards tied to multiple choice, computerized high stakes testing that is turning the state's public schools into soulless test prep factories as more and more experienced teachers run for the hills and suburban parents are even up in arms.

Save Our Schools New Jersey (SOS NJ), (not to be confused for Save Our Schools March, two separate and distinct organizations), has its members calling state senators to move this bill forward.
It's called political action.

Help, save us! None of the teachers I know want to continue spending 7 and 8 hours on their Sundays writing lesson plans tied to the Common Core or be evaluated by a student's score on a meaningless multiple choice test. It's a sick, dysfunctional system on the verge of collapse.
Teachers, parents and students in NJ are at their breaking point.

In the new normal of austerity, job losses, and political corruption in Trenton, New Jerseyans are
waiting for the end of  Governor Chris Christie's political career. He rode into town by bullying teachers and decimating funding for public education while touting the mantra of no excuses. Funny how a few years makes a difference. High stakes testing, accountability for teachers, merit pay for higher test scores, for profit charter schools, vouchers, and value added measurements, just don't seem to have the same allure when people are struggling to pay their bills and buy food. Meanwhile, New Jersey's bond rating has gone down the tubes along with the state's quality of life, except for the 1% of course.

Looks like it's time to start holding the Governor accountable for his destructive policies and get some new leaders in Trenton who aren't crooks and a bullies. Stay tuned. :)

Measure would set up task force, could delay the consequences of new standards and associated tests by as much as two years

A bill to slow the impact of the new Common Core State Standards and accompanying student testing won big -- and bipartisan -- approval from the state Assembly this week.
Now the question is: What happens next?
The measure won a 72-4 victory in the lower chamber on Monday, with two abstentions.
Led by state Assemblywoman Mila Jasey (D-Essex) and a dozen other prime sponsors, the bill would create a task force to review the impact of the new Common Core standards and the accompanying Partnership for Assessment of Readiness for College and Careers (PARCC) testing.
Most importantly, it would delay the use of the new tests to measure schools and teachers until the task force's review was complete. The bill doesn’t put a precise time frame on the review, but it could be up to two years.
While the Assembly’s vote was by far the furthest the state legislature has moved on such a measure since the state adopted the new standards in 2010 and committed to the PARCC testing, it is unclear how much farther it will proceed.
State Sen. Jeff Van Drew (D-Cape May) last week filed a companion bill in the Senate and has voiced some optimism about its prospects. But so far, the Senate education committee has only posted the bill for discussion -- not for vote.
The discussion is slated for the committee’s next meeting on Thursday.
State Sen. Teresa Ruiz (D-Essex) yesterday said she is pursuing other paths to what could be similar end, including changes in state regulations that would not require legislative approval. Ruiz has also posted a second bill for discussion Thursday that would create a separate task force to review the state’s growing testing regimen, although without the teeth of the Van Drew bill to delay the consequences of that testing.
Van Drew yesterday said he would also support Ruiz’s second bill and hoped that the discussion on his bill on Thursday would move the issue ahead.
“I know the Senator has some concerns, and I am open-minded on this,” he said. “I know (the bill) has some problems, but I will say this has gone further than I ever expected. When I started, I was a lone wolf on this.”
School associations and advocates are watching the late-session jockeying closely, with the chief lobbyist for the New Jersey Education Association, the teachers union, saying she would support any move -- be it legislation or regulation -- that would slow the implementation of the new testing and its use in evaluating teachers.
“I don’t see anything in this bill that the department can’t accomplish on its own through regulation,” said Ginger Gold Schnitzer, the NJEA’s director of government relations. “But it hasn’t happened yet.”
Discussing the bill on Thursday, she said, “may allow for a little more time to see if people can work together on this.”
Schnitzer said she would be amenable to delaying Common Core and PARCC through regulation, as well as legislation. “”We are pushing both paths,” she said.
Jasey last night said she had hoped that Ruiz would put the bill up for full vote, since the committee hearing may be the last of the session before summer.
“I’m disappointed she is not putting it up for vote out of committee, especially in light" of yesterday's victory in the Assembly.
“I had expected to pass with bipartisan support, but certainly not that overwhelming,” Jasey said of the vote. “It reflects the anxiety level across the state.”
She also cited rising pressures outside the state as well, including a recent statement from the Bill and Melinda Gates Foundation -- one of the early backers of the new standards and testing nationwide -- to hold off on using the new tests for evaluating teachers.
The Christie administration, led by acting state Education Commissioner David Hespe, has stood by the existing timeline so far, and said that changing the rules now could imperil the state’s federal waiver from the No Child Left Behind Act.
Hespe has specifically said he would also like to wait and see the early results of the new PARCC exams -- which this spring underwent field-testing in more than 1,000 districts -- and the new statewide teacher evaluation system before judging the impact.

Here is the URGENT message in my inbox today, time to make some phone calls.
Urgent!
Thanks to your calls and emails, A3081 - the anti-high stakes standardized testing bill - overwhelmingly passed the New Jersey Assembly last week (72 yes; 4 no; 2 abstentions).
Now, we need your help to move it through the New Jersey Senate!

Please take these two quick actions:
1) Call New Jersey Senate President Steve Sweeney before 9 am this Thursday and ask him to post S2154, the Senate version of this bill, for a full Senate vote on June 26th!

2) Click here to ask your Senator to support S2154!
To turn this legislation into law, the Senate needs to approve it before the end of June, when the legislature adjourns for the summer.
Otherwise, our children, our teachers and our public schools will be subject to all the punishments associated with the new PARCC standardized test, starting this fall.

A3081/S2154 would stop the punishments and create a task force of experts to explore alternative ways of assessing students.
The expert task force also would examine the new teacher evaluation system, implementation of the Common Core standards, and the PARCC test.
We are part of a broad, bi-partisan coalition that strongly supports A3081/S2154 because this legislation would protect our children, our teachers, and our public schools!