Charter School Strong-Arming Where No One Wants Charters: A Case Study

The Emerald Academy Charter School Application submitted to and approved by the Knox County Board of Education is signed by Steve Diggs, who is the Executive Director of the Emerald Youth Foundation (EYF), a Christian ministry with some of Knoxville’s and the State’s highest rollers onboard.  This effort represents a prime example of corporate missionaries being joined by Christian missionaries to force-feed charters where no one wants them.

When the Board met on June 4, there was no subtlety in the message the superintendent and Broad Foundation stooge, Jim McIntyre brought:  you can vote down the Emerald Charter School if you want, but the application will go the state, where the Governor will make sure that the charter gets, uh, chartered.  Note above the Gov is an honorary member of the Board of Trustees for Emerald, as is his wife, Dee, who is also the owner of the Cleveland Browns.  The discussion started with four for the charter, and the final vote was 7-1 for Emerald.  Imagine that.

The Emerald Charter School is somehow supposed to function as a non-sectarian branch of the Emerald Youth Foundation (EYF).  Here’s how their website explains it:

Now the EYF knew nothing about starting a charter school until, by some unexplained intervention, a small and lucrative chain from Cleveland was chosen to be the model for the Emerald Charter Schools (ECS).  Note the plural: there is only one so far, but be assured that there are more in the works if ECS can grind out higher test scores than the local high-poverty public schools.  They plan to do just that by following the KIPP Model, with selective retention, longer hours, fewer special ed and disabled, a chain gang zero tolerance pedagogy, total focus on tests, and corporate infusions of more cash.

But KIPP is not in the consulting business for knock-offs, so with the help of some Cleveland connections (perhaps the owner of the Cleveland Browns could help), a little-known outfit known as EPrep—itself a KIPP knock-off—became the inspiration for and partner with ECS.  Here is a clip from the Cleveland Plain Dealer on EPrep:

. . . E Prep, which recently moved to East 36th Street and Superior Avenue, is in session from 8 a.m. to 4 p.m. five days a week, 10 months a year. Students receive an hour of instruction every day in each of five subjects: reading, math, writing, social studies and science. Those who lag sometimes have to go to school on Saturday.
And the rules are draconian. Shoving another student triggers expulsion. Even an inadvertent jostle draws a scolding to be more careful.
Students wear uniforms that include black blazers bearing the school crest. A child who is missing something as little as a belt ends up in the office until someone delivers the item from home.
Parents are warned upfront about the rigor, at their three-hour mandatory orientation. Recruiting director Temeka Brantley gets out the message even earlier, at community events and gathering places.
"The majority of my time is spent talking about the commitment," she said. "I try to be explicit and say, 'You have to be committed to send your children here.' " . . .

The founder of EPrep and its variously titled Cleveland charters is John Zitzner, whose small empire is now known as Breakthrough Schools.  Zitzner is also the principal officer of another nonprofit corporation, Friends of Breakthrough Schools (FBS), which was set up for raising corporate cash for his venture.  The amount that Zitzner collects from his schools directly is not known, but he pays himself $142,000 a year for raising money for his own enterprise. FBS collected over $3 million from the feds in 2012, and Zitzner now has over $16 million in non-profit in his bank account for Breakthrough operations.

One of Zitzner’s strategies has been to collect and share the wealth, shall we say, through close ties to Cleveland’s business elites.  Zitzner is now at work in Knoxville to create a similar network of business, church, and public elites to push forward the same agenda of chain-gang charter schools that he got up and running in Cleveland.

The chart below that is copied from the charter application includes the Emerald’s collection of new charter board members (asterisks indicate board members): 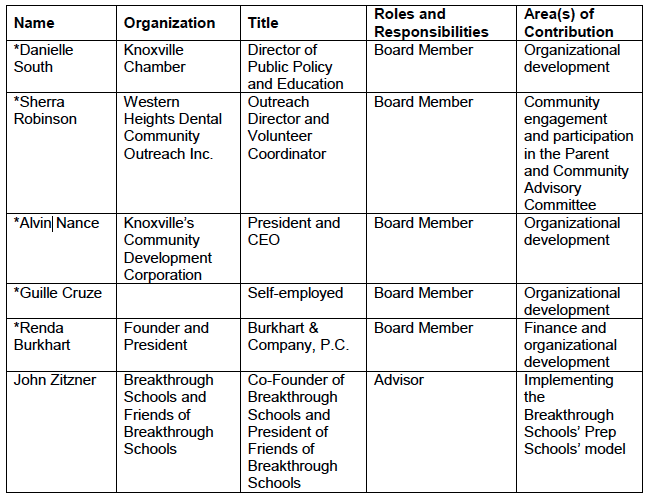 The charter application also includes scores from one of Zitzner’s Cleveland schools, Village Prep—the one, of course, with the least flaws to talk about:

Can’t imagine why Zitzner had nothing to say about some of his other operations:

Knoxille’s alternative paper, MetroPulse, did a good story last January of some of Zitzner’s school performances.

Meanwhile, the budget for public schools and teachers was axed the same night that Emerald was approved.  The $5 million that was cut happens to be in the same ballpark as the amount that KNS will lose to pay corporate toadies to get fat operating a chain gang school that no white parents in Knoxville would ever consider for their own children :


The school board also passed an amended budget, which withdraws an initial proposal for a 3.5 percent raise for teachers across the district. Knox County Mayor Tim Burchett's initial budget proposal only funded $427.8 million of the school system's $432,335,000 request. Funds for the school system were further reduced when the state cut basic education program (BEP) funding for the schools.
at 10:12 PM