. . . . reformers who have touted NAEP score increases in the past as evidence of  success are now trying to spin the newest results as anything but their the failure of their reforms. Education Secretary Arne Duncan, in 2013 for example, credited Common Core implementation for higher NAEP scores in some states. He said:


“In 2013, reading and math scores edged up nationally to new highs for fourth and eighth graders. It is particularly heartening that reading scores for eighth graders are up, after remaining relatively flat for the last decade. Achievement among the largest minority group in our nation’s public schools—Hispanic students—is also up since 2011. And higher-achieving students as a whole are making more progress in reading and math than in recent years.

“While progress on the NAEP continues to vary among the states, all eight states that had implemented the state-crafted Common Core State Standards at the time of the 2013 NAEP assessment showed improvement in at least one of the Reading and/or Mathematics assessments from 2009 to 2013—and none of the eight states had a decline in scores. [Emphasis added]

Fast forward to today, and Duncan has a different explanation for the lower scores. Brown reported:


Duncan defended those policies in a call with reporters Tuesday, saying that massive changes in schools often lead to a temporary drop in test scores while teachers and students adjust. But the new standards and other policies, Duncan said, are poised to improve student achievement — and students’ lives — in the long term.

“Big change never happens overnight,” Duncan said. “I’m confident that over the next decade, if we stay committed to this change, we will see historic improvements.” 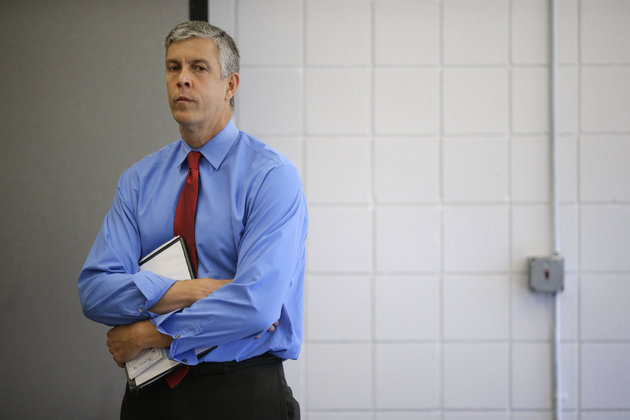