Latest link update at the end of the article is October 29, 2015 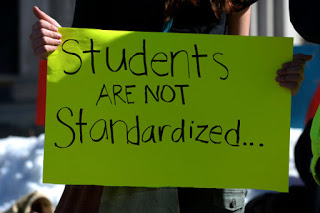 On October 24, 2015 the Obama administration announced a shift of its education policy when it announced a change in the Department of Education’s position on standardized testing. As reported by Kate Zernike in The New York Times,

Specifically, the administration called for a cap on assessment so that no child would spend more than 2 percent of classroom instruction time taking tests. It called on Congress to “reduce over-testing” as it reauthorizes the federal legislation governing the nation’s public elementary and secondary schools.

This is being promoted in the corporate media as a dramatic shift in the Obama administrations support for standardized testing. It should be greeted with a high degree of skepticism and caution, however. The over two-decade siege on public education codified into education policy by No Child Left Behind followed by Race to the Top is not going to suddenly be scaled down in one day. There are too many corporate interests, such as Pearson, the Gates Foundation and others, which have made standardized testing the center of their method of privatizing public education, for the corporate agenda to be given up.

According to The New York Times article, the change in policy was prompted by a new survey from the Council of Great City Schools. The Council is made up of 68 large school districts with enrollment of over 35,000 students.

In its press release, Student Assessments in Public Schools Not Strategic, Often Redundant, The Council says,

The average of roughly eight standardized tests per year consumes between 20 and 25 hours each school year and frequently produces overlapping results. There were about 401 test titles being used in the nation’s largest urban school systems in the 2014-15 school year and students sat over 6,500 times for tests across the 66 school systems studies, the research found.

The two year study, believed to be the most comprehensive ever undertaken to ascertain the true extent of mandatory testing in the nation’s schools, was conducted by the Council of Great City Schools at the request of its board of directors, which wanted a full picture of the testing practices in its big-city school systems. The Council’s board requested the inventory in 2013 to better inform the public debate and to shape needed reforms.

The Council of Great City Schools met with Obama on March 16, 2015. In its press release the Obama administration gave an outline of the policy which it announced October 24, 2015.

The October 24th announcement comes at a time when a bipartisan Congressional conference committee is trying to come up with a revision of the Elementary and Secondary Education Act. The rewrite is getting lost in the chaos on Capitol Hill and this must be factored in as the reason for this announcement now. The Republicans would like a bill that would implement competency-based learning and online education based on an ALEC-inspired return to state control of education. The Democrats, on the other hand, had been promoting an increase in standardized testing as a continuation of the neoliberal education agenda started by President Bill Clinton, and disguised as the next civil rights issue.

In its press release, the Council of Great City Schools concludes,

The Council released preliminary recommendations with the report that call for retaining current annual tests in core subjects but eliminating tests that are either redundant or low quality.

In addition, the Council announced that it will launch a commission of researchers, school leaders, teachers and parents to develop “a more thoughtful approach to assessing the academic needs of urban schoolchildren.” Casserly indicated that commission chairs would be named in the next two weeks.

Since the Obama administration is responding to the Council’s report (and it may be coordinating this report to promote its agenda), this must be carefully watched to see if the Council is taking an independent stand in defense of public schools or if this is a fine-tuning of the neoliberal agenda for privatizing public schools. Who they put on the commission they are forming will tell us a lot about the course they and the Obama administration are taking.

As David Greene points out,

If, according to the Council of great city Schools, the average amount of time devoted to taking mandated tests during the 2014-15 school year was 2.34 percent of school time for the average 8th grader—the grade with the most mandated testing time, what indeed is the Pres offering? A real reduction of .34%?

A real reduction of .34 percent? Seriously?

Two percent is 20 hours of instruction time given to standardized testing.

As always, the corporate media plays a crucial role in framing people’s perception of these developments. The New York Times article announcing the changes in the Obama administrations policy on standardized testing is a case in point. Nowhere in the article is the growing Opt Out movement mentioned as a factor. Nowhere to be found are teachers, or the huge education blogging community that has been at the forefront of opposition to corporate education reform, or university professors who have been increasingly speaking out about market-driven education policies.

Instead we get comments from corporate supporters of standardized testing like Michel Petrilli, the president of the Thomas B. Fordham Institute, a strong promoter of charter schools and the Common Core. After years of peddling standardized tests, an obviously prepared-with-talking-points Petrilli said,

There’s plenty of agreement that there’s too much testing going on.” But, he added, “we have to be careful, as with anything federal, that it doesn’t lead to unintended consequences.

The biggest mischaracterization of the “mounting bipartisan opposition to increased and often high-stakes testing in the nation’s schools” in the New York Times article, however, is the nature of the opposition to standardized testing. The reporter says,

Teachers’ unions, which had led the opposition on the left to the amount of testing, declared the reversal of sorts a victory. “Parents, students, educators, your voice matters and was heard,” said Randi Weingarten, the president of the American Federation of Teachers.

This is corporate media spin of the nature of the grassroots opposition to standardized testing and Common Core. This opposition is not coming from the leadership of the American Federation of Teachers or the National Education Association. Though Randi Weingarten makes milk-toast statements about standardized testing and Common Core to play her role as spokeswoman for teachers for the corporate media, behind the scenes her role is quite different. Far from being “left”, she collaborates with the right-wing, anti-public education American Enterprise Institute and promotes the Gates and Broad agenda of corporate education reform. See these posts on Defend Public Education! for detailed reporting on how she has been collaborating with these interests to promote standardized testing and using those tests for teacher evaluation.

The Broad Foundation and the Unions

Talking to the Choir: AEI panels discuss their attack on public education

Turning “Collaboration” Into a Bad Word

There can be no doubt that it is the grassroots opposition to standardized testing and Common Core that has led to this change of tactics on standardized testing by the Obama administration. Hundreds of parent organizations in schools across the country have been garnering increasing support for opting out of standardized tests and for a return to community control of schools. Rank-and-file teachers through such organizations as United Opt Out and BATs, have been organizing independently to fight the disastrous impact of corporate education reform.

We must be abolitionists when it comes to standardized testing. There can be no more talk about “reducing the amount of testing.” The Obama administration has adopted this characterization by some of the opponents of corporate education reform to defuse the Opt Out movement. It is promoting the same corporate agenda it always has.

NAEP: Further Evidence of Reformy Failure
Curmudgucation – October 28, 2015
“Mike Petrilli of the Fordham Institute has gone so far as to call the new NAEP scores “heartbreak”.

For Whom the Bell Tolls; It Tolls For Rhee
Gary Rubinstein’s blog – October 28, 2015

Where did the Obama administration’s 2 percent cap on standardized tests come from? Valerie Strauss says you won’t believe it.
The Answer Sheet @ The Washington Post – October 26, 2015

What will Obama’s new testing plan mean for American students?
PBS NewHour – October 25
An interview with NYT reporter Kate Zernike whose NYT article was quoted in the above post.
at 12:35 AM