The most recent link update at the end of this post was posted October 16, 2015.

This post is an update to the post:
The Siege of Philadelphia Public Schools | Defend Public Education!
August 29, 2015 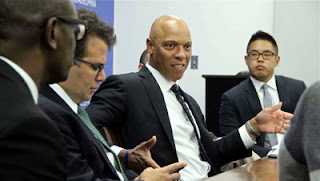 Philadelphia public school Superintendent William Hite with some of his management team.

On September 15, 2015 the Philadelphia Public School Notebook published an interview with Philadelphia School Superintendent William Hite. In the interview, the interviewer stated, “Some people seem convinced that you are here to privatize and that has been your task.” Hite replied,

On September 24 Hite announced the next phase of the privatization of Philadelphia public schools. The changes will create great churn for 5000 students affecting twelve schools. The changes include closing schools, opening new charters, and charter and in-district conversions.

Anyone following the adage “watch what they do, not what they say” was not surprised. Early in July 2015 Hite had signaled that the School Reform Commission is on course in following the Boston Consulting Group plan for privatization of Philadelphia Public Schools by appointing ten new highly paid administrators. The majority come from the charter and corporate education reform world.

This follows a pattern where, at its public meetings, the SRC devotes a majority of time to resolutions supporting and organizing charter schools. There is a continual pattern of neglect of the public schools. The percentage of the PSD budget for District schools is 45% and for non-District schools 24%. Yet the SRC is solely focused on charters. It should also be noted that 9% of the School District budget is debt service to the financial community. Currently, Philadelphia has 84 charters. Hite’s plan is to continue the expansion of the charter sector.

In his September 24 announcement, Hite announced the resumption of school closures. After 24 schools were closed at the end of the school year in 2013, Hite assured the traumatized school community that this was the end of closings. Two schools will now be added to the list of closed school buildings left vacant, turned over to charters, or sold to real estate interests at bargain basement prices.

Hite announced the expansion of “learning networks” from eight to thirteen. This would include resumption of turning schools into Renaissance charters that was begun under Superintendent Arlene Ackerman. Despite claims by the District that Renaissance schools perform far above the public schools based on standardized test scores, the latest PSSA test scores do not confirm the hype. (See the comments in PSSA scores for District, charter schools: Philly students struggled in math.)

The plan is to turn three schools over to Renaissance charters. The underhanded and undemocratic method being used can be seen with the manipulation of parent meetings about the turnover at the schools. One year ago, using their much touted issue of “school choice”, the SRC gave the parents at Steel and Munoz schools a choice of their school remaining a public school or being turned over to a charter company. Parents in both schools voted to keep their schools public. Having learned its lesson, the SRC will give the parents at the three new charter conversions only a choice of which charter company gets ownership of their school.

But the undemocratic methods didn’t stop there. Two schools report that the meetings were highly manipulated. At Wister, parents reported that information about the meeting was hard to find. Those that showed up for the poorly publicized meeting were told the meeting had been moved to another location away from their school. Once the meeting began, the parents learned they were not there to be listened to by the SRC representatives, but they would get a sales pitch. Introduced to the parents was a parent from Mastery Cleveland Charter School who invited the parents for a tour of the school. The Wister principal informed the representatives from the SRC that her daughter had attended Cleveland and the school was great for her child before it was turned over to Mastery. She also informed the meeting that Wister had made AYP in 2008-2011 until schools were further starved for funds by the state budget under the Corbett administration. SRC spokeswoman Evelyn Sample-Oates told the angry parents, “The recommendation is from the superintendent for what should happen to this school.”

The day before Hite’s announcement, bids were put out for major repairs to the Wister schools infrastructure totaling over $2 million. This has been standard practice since the state takeover in 2001, neglect maintenance and upkeep of the public schools and then contract out upgrades when they are to be converted to charters or sold.

The same methods to frustrate parents were used at Jay Cooke school. Parents were not told the location of the meeting until the last minute and then it was difficult to sign up. (Teachers were not invited to the meeting.) The unpublicized meeting was held at the nearby church. District officials openly stated they withheld the location information “to ensure a small gathering of parents.” A few parents (the way they will be selected has not been disclosed) will join a review committee that will be able to give advice to Hite before he decides which charter to impose on their children. The SRC will vote on the conversions on January 21, 2016.

At the Cooke meeting, parents pointed out that a nearby school that had been a Renaissance school since 2011, Birney Academy, had been taken from the national for-profit charter operator Mosaica in July, and transferred to American Paradigm without an SRC vote. Mosaica had been placed in fiscal receivership in October, 2014, by a federal judge. This follows a pattern where failing charter schools, such as Young Scholars Frederick Douglass charter school, are turned over to Mastery.

The Mastery Charter school network, which now has fifteen schools in Philadelphia, is favored for the turnover schools. Each of the three elementary schools that are being turned around as Renaissance charters are within one mile of the Simon Gratz Mastery Charter High School.

The first cohort of seven Renaissance schools came up for their five-year renewal this year. Four were renewed. One charter operator surrendered its school to Mastery. The SRC is having non-renewal hearings for two of the original Renaissance schools. The clear pattern is to close independent charters and turn them over to charter management companies like Mastery and KIPP. Mastery and KIPP are also planning to expand their charter management companies in Camden, New Jersey where they are promoting the privatization of all public schools.

On May 15, 2015 The Broad Superintendents Academy announced that Scott Gordon, CEO of Mastery Charter Schools, had joined its latest cohort of trainees. The press release stated that the latest cohort is made up of ten trainees who are “passionate, proven leaders to transform America’s urban school systems so every student receives a world-class education.” Also joining the trainees is Paul Kihn, former Deputy Superintendent of the School District of Philadelphia, who resigned in July from the SDP in Hite’s latest administrative shuffle. Kihn returned to the Washington D.C.-based McKinsey and Company, “a global management consulting firm.” In 2011 around the time he was hired by Hite, Kihn co-authored Deliverology 101: A Field Guide for Education Leaders, with Sir Michael Barber, chief education advisor for the British testing company Pearson. They join alumnus William Hite who is a graduate of the Broad Superintendents Academy Class of 2005.

The new school openings include a new Science Leadership Academy. The principal of the first Science Leadership Academy, Chris Lehmann (to the right of Hite in the picture above) has been brought into top management as Assistant Superintendent to begin creating a network of his SLAs. SLA had been sharing a school with Beeber Middle School that will be closed and become a second SLA. A third SLA is planned in the new school building being built by Drexel University located where University City High School was recently demolished after its closing in 2013.

The SLA school at Drexel will be teamed with the nonprofit Big Picture, a national charter chain. A second new school owned by Big Picture is planned for North Philadelphia. Last spring Big Picture High School in Los Angeles was threatened with closure since it only had 90 students for the planned 572, but its closure was delayed.

Unstated in the reports about the new charter schools is that they will all be non-union.

Members of the Philadelphia Federation of Teachers have been staging a work-to-rule action to protest the conditions in the public schools. Though they started planning before Hite announced the latest assault on public schools, Hite’s privatization plan has become part of the protest. School District employees have been working under a contract frozen in place since September 1, 2013. Salaries are frozen in place including no step increases. Violations of seniority for job placements are routine. The SRC refuses to negotiate its demands for changes in health benefits and draconian work rule changes. On October 21, 2014, the SRC revoked the teachers’ contract. The legality of the revocation of the contract is before the Pennsylvania Supreme Court. A decision is expected after the mayoral election at the beginning of November.

Though the SRC has not disclosed the figures, there are reports of many unfilled teacher positions in many schools. The SRC’s attempt to privatize substitute teaching has been an ongoing disaster requiring teachers and principals to cover classes with their preparation time.

On October 8, 2015 hundreds of Philadelphia public school students, organizing through social media, staged a student strike to protest the lack of funding for Philadelphia public schools. The Pennsylvania state legislature has been at an impasse for more than one hundred days. ALEC legislators are refusing to acknowledge the education-funding crisis in Pennsylvania and are using the crisis to advance a privatization agenda.

Le Bok Fin: What Do We Value? What Are We Forgetting?
PFT Caucus of Working Educators - October 12, 2015

Mastery gets $9.6 million federal grant to expand
Philadelphia Public School Notebook - October 14, 2015
In addition to Philadelphia, this grant will be for Mastery charter management company to expand in PA, NJ, DE and DC.
This grant is part of a $157 million grant that Arne Duncan announced three days before he announced his resignation. It will go to 12 charter management organizations and eight state agencies across the country.