Anyone with the intellect to appear brilliant to George W. Bush is probably not smart enough to stay out of the public eye.  The re-emergence of Margaret Spellings as president of a prestigious state university system proves as much. 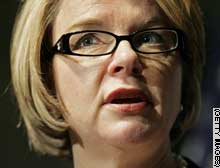 Having ballooned her bank accounts since 2008 as she criss-crossed the nation serving on executive boards and offering corporate education consultation as chief proprietor of her modestly named company, Margaret Spellings, Inc., it appears that Spellings has once again been called upon by the billionaires to use her hammy fists and her drunk cowgirl persona to beat down one of the last remaining civilized institutions of our dying planet.

When Spellings left the White House, she carried with her the knowledge of how to become the most despised education official in the land to everyone, at least, who does not fly on a corporate jet.

Along with Bush's bagman, Sandy Kress, Spellings used her extensive knowledge (a B.S. in poly-sci) to craft an education policy for the nation that would deconstruct public education and hand out the remaining chunks to billionaires and their underemployed Ivy League drones.  By the time she left her office at ED, billions in ed funds were going into the pockets of Bush cronies, almost half of U. S. schools were on the NCLB failure list, and the charter school industry was draining public school budgets in 40 states.

A few of the other Bush accomplishment that Spellings oversaw:


Since NCLB became law in 2002, Bush budgets have underfunded NCLB by nearly $90 billion dollars (pdf). Head Start has been cut back by 11 percent. Career education programs, educational technology, and other programs like Reading is Fundamental have been zeroed out in Bush budgets. While cynically demanding that special ed students perform at the same levels as other students, $30 billion has been cut from the authorized amount in the 2004 IDEA Improvement Act. In short, the poor, the disabled, and the immigrant children have been sacrificed to make an ideological case against public schools and for vouchers and charters (even as research shows they are no better at producing test scores than the schools they would replace.

But it was the work of the Spellings Commission that no doubt put Spellings at the top of the Koch heads' list of candidates for UNC president.  The Commission, which was headed by the surly Charles Miller (the John Bolton of higher education), offered a plan to turn higher education into research centers for corporate R&D, human capital training centers, and revenue streams for corporate contractors and student loan companies.  Let's remember, too, that the Spellings report was keen to create the same intrusive accountability procedures in higher ed that devastated K-12.

Perhaps it is time for the tenured faculty to finally get off their asses and to mobilize against the impending Spellings disaster.  It is now or never.