“This increasingly well-rooted network provides the Gulen Movement with daily access to the minds of over 45,000 students, and yearly access to hundreds of millions of hard-earned tax dollars.” — Sharon Higgins 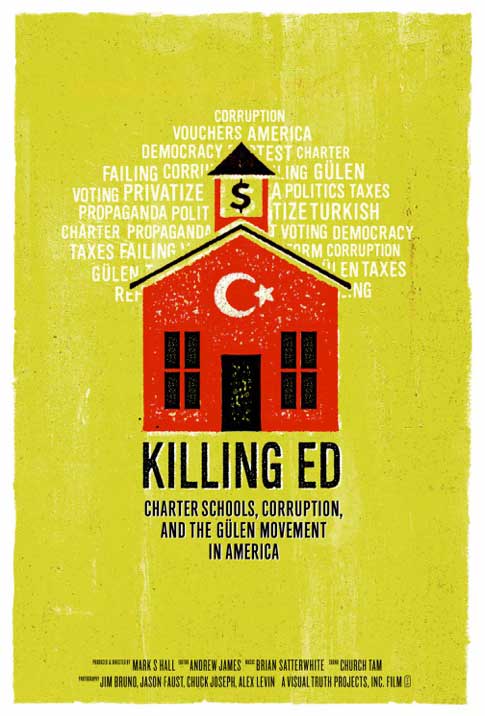 The largest chain of charter schools in the United States is that of those associated with the secretive Gülenist religious cult. With financial might sufficient to buy off politicians, and the political clout to push legislation, Gülen charters, like all charter schools, are the inevitable result of what happens after putting public money into private hands. Gülen is just one of many cults dominating the corporate charter school industry. ﻿Charter schools are symptomatic of the privatization of the public commons.

After years of being able to remain in ﻿obscurity while silencing their opposition, the Gülenist Network is beginning to find itself under ever increasing scrutiny. The Turkish government hired Amsterdam & Partners LLP to investigate. Their findings are even more shocking than many Gülen observers expected. Additionally, a full length documentary film entitled KILLING ED has been released, which outlines the shadowy Gülenist Network’s pervasive involvement with privately managed charter schools.

While some of lucrative charter school industry's top profiteers have been brought in to attempt damage control, there remains hope that this story of corruption, greed, and indoctrination will begin to reach an ever widening circle of people.

Please find below Amsterdam & Partners LLP’s press release, press conference video, and trailer for KILLING ED. Stopping the charter school industry must become one of our top priorities if we value public education as a society.

The following press release was distributed to media on Tuesday, February 16, 2016:

LOS ANGELES, February 16, 2016 – A formal complaint has been issued under the California Uniform Complaint Procedure (“UCP”) urging the California Department of Education to conduct a full investigation into the financial practices of the Magnolia Public Schools charter school network, which currently operates 11 active charter schools in California.

The UCP Complaint – brought by the law firm Amsterdam & Partners LLP, in conjunction with interested California taxpayers Dr. José Moreno and Tina Andres – notes that a 2015 audit conducted by the California State Auditor discovered widespread accounting impropriety and raised numerous other important questions about Magnolia’s financial practices. Notable among them is Magnolia’s connection to the global organization of charter schools and businesses headed by Turkish national Fethullah Gülen, a reclusive Islamic cleric who resides in Saylorsburg, Pennsylvania.

“The State Auditor was unable to verify the propriety of a staggering 69% of financial transactions from a sampling at the Magnolia schools, but it did identify large contracts from Magnolia to affiliated vendors, and revealed that Magnolia has improperly spent hundreds of thousands of taxpayer dollars on immigration lawyers to import teachers from Turkey,” said Robert Amsterdam, founding partner of Amsterdam & Partners LLP. “Although Magnolia’s CEO and Superintendent insists that there is no connection between Magnolia and the Gülen Organization, we respectfully direct the California authorities to Magnolia’s financial ties to the Pacifica Institute in Irvine, and to the similarities between Magnolia’s operating profile and that of other known Gülen Organization charter schools.”

Tina Andres, one of the individual Complainants, said, “Magnolia’s misuse of public funds is intolerable. They use our tax dollars to pay for visas to hire Turkish teachers, while there are plenty of talented and highly qualified teachers looking for positions in our area.”

Magnolia has submitted multiple new charter school applications valued at more than $48 million each. The UCP Complaint asserts that the volume of negative findings of the California State Auditor from a mere sampling of Magnolia’s transactions and vendor agreements should have spurred a comprehensive investigation into the Magnolia charter school network, and that the State of California owes a fiduciary duty to California taxpayers to probe further.

Dr. José Moreno is an Associate Professor and Chair of the Department of Chicano & Latino Studies at California State University, Long Beach, and a former President of the Board of Education for the Anaheim City School District. He has four children currently attending public schools in Anaheim, where Magnolia is seeking to expand. Tina Andres is a veteran public school teacher in the Santa Ana Unified School District, which hosts a Magnolia school. She has two children attending public schools in the district, one of which is a charter school.

Amsterdam & Partners LLP – an international law firm with offices in London and Washington, DC – acts for the Republic of Turkey, and is conducting a global investigation into the alleged illegal activities of the Gülen Organization. Additional information about Amsterdam & Partners LLP is available at www.amsterdamandpartners.com.

﻿KILLING ED is a new documentary feature film that exposes a shocking truth: that one of the largest networks of taxpayer-funded charter schools in the U.S. are a worst-case-scenario—operated with questionable academic, labor, and H1-B visa standards by members of the “Gülen Movement” – a rapidly expanding, global Islamic group whose leader, Fethullah Gülen, lives in seclusion in the Pocono Mountains of Pennsylvania.