During a speech in Washington today, Spellings offered a couple of interesting details on the planned National Math Panel:

To support current and new math teachers with the tools they need to succeed, last month the President established a National Math Panel. I'll be announcing the members today, and one of them is with us--Dr. Camilla Benbow, Dean of the Peabody College of Education and Human Development at Vanderbilt University. By January 31st, 2007, she and the rest of the panel will review the best research available and issue a report on what works in teaching math. And to help schools apply those recommendations, President Bush has asked the Congress to fund a new initiative called Math Now.

One member, then, will be Dean Camilla Benbow from Peabody. As someone from a college of education, the current scourge of the neocon educationists, Dr. Benbow must have something special to be chosen for this important project to manipulate math teaching in much the same way that reading has been turned into a joyless code-breaking exercise. Checking out her vita, I found this article she co-authored that would likely cause any neocon to perk up: Tracking Exceptional Human Capital Over Two Decades (in PDF). Here is the brief Discussion section:

Individuals identified solely on the basis of one very high SAT score before the age of 13 achieved occupational success comparable to that of individuals attending world-class mathematics, science, and engineering graduate training programs. Instruments such as the SAT assess much more than book- learning potential; they capture important individual differences in human capital critical for advancing and maintaining society in the information age through a variety of demanding professions, including medicine, finance, and the professoriate. Assessing exceptional cognitive abilities early uncovers a population with remarkable potential for occupational roles requiring complex information processing and creativity.

Fascinating! Dr. Benbow is part of the new breed of psychometric psychologists, who are the "scientific" inheritors of the kind of work for which the famous psychologist/eugenicist, Lewis Terman, devoted his life--the use of test scores to engineer an efficient society based on the rule by those with high IQs and the exploitation of those with lesser abilities. Terman, by the way, was also famous for deriving IQ scores for famous dead people, from Copernicus to Lincoln. Science. 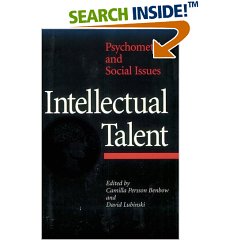 Dr. Benhow has also co-edited and contributed to a heady volume called Intellectual Talent: Psychometric and Social Issues. The introduction has this provocative title, "Politial Correctness and the Zeitgeist: Genetic Antecedents to Human Behavior," and the closing chapter is written by none other than the famous racialist, Arthur Jensen, who began his fame in 1969:

Jensen's most controversial work, published in February 1969 in the Harvard Educational Review, was titled "How Much Can We Boost I.Q. and Scholastic Achievement?" It concluded, among other things, that "head start" programs designed to boost African-American IQ scores had failed, and that this was likely never to be remedied, largely because, in Jensen's estimation, over 70% of the within race IQ variability was due to genetic factors, and the 30% left over was due to non-shared environmental influences (e.g., prenatal drug exposure, placental nutrient competition when there are multiple births).

Small world. Wonder if Dr. Benbow and her National Math Panel Committee will find any credibility in research that shows the advantages of heterogeneous classroom practices? Wonder if the slow learners of math will get the same kind of math as those who show great promise for advancing our human capital? Wonder if you would call this kind of science the " research" that will be used to justify the scientifically-based racism of no expectations? Wonder if this is the future we will choose for ourselves? Wonder if anyone cares?

There is a review of Intellectual Talent: Psychometric and Social Issues on Amazon that you might want to read. It ends with this gush:

Egalitarian educationalists have met their match in applied psychometrician-psychologists. At no cost to dull or mediocre children, brighter children can be helped by programmes of fast track learning. Large-scale experimentation should now commence. Treating children according to their abilities and attainments to date would almost certainly convey wide benefits; and merely allowing parents to choose their children's tracks would quickly end the sorry dumbing-down of state education and the betrayal of intelligent children in the English-speaking world.