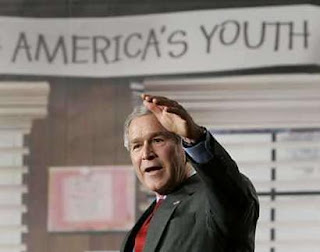 W is on the campaign trail to preserve what he believes is one of his greatest accomplishments, the No Child Left Behind Act. But like most of the delusions and destructive policies that characterize this administration, reality is playing out all across the country and even down the road from the White House in the Maryland suburb of Rockville.

At a funraiser in Louisville, Kentucky,W. said "watering down" the No Child Left Behind Act "would be doing thousands of children a disservice."


"It's working," Bush said. "We can change parts of it for the better, but don't change the core of a piece of good legislation that's making a significant difference in the lives of a lot of children."

You see, here's how it works at schools like Earle B. Wood Middle School in Rockville, Maryland where teachers and administrators agonize over leaving children behind. The winning strategy has become a laser beam focus on what are referred to as "the bubble kids" and getting them to pass the test.

The next week, teachers regularly began pulling selected students from social studies, science, gym, art and other elective classes to work in small groups to prepare for the test. They used test-prep workbooks and sample material from the state education department's Web site.

They're not teaching the material," Cullison said. "They're teaching them how to take a test, which is a huge disservice to these kids."