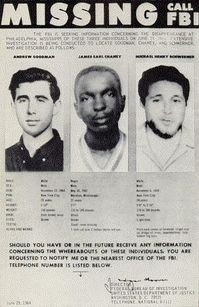 So many memories. During the Freedom Summer of 1964, three civil rights workers went missing. Their bodies were eventually found on August 3, 1964 near Philadelphia, MS. They had been beaten and shot to death. They were " James Chaney, a 21-year-old black man from Meridian, Mississippi, Andrew Goodman, a 20-year-old Jewish anthropology student from New York, and Michael Schwerner, a 24-year-old Jewish social worker also from New York."

The day before the 16th anniversary of the unearthing of their brutalized bodies, Ronald Reagan chose Philadelphia to kick off his presidential campaign, delivering what civil rights attorney, J. L. Chestnut remembers as a racist speech to let the people of the South know where he stood on the issue of race:

The Reagan rally took place in the town square on the unkempt Main Street, and I would guess that every racist nut in the town was crowded into the square. This writer and only one other black person were present, and he was pushing a gray haired old white man in a wheelchair who appeared already dead. Reagan delivered the most racist speech I had heard since Wallace's "segregation today, tomorrow and forever "foolishness. Hiding behind the Reagan smile, he proclaimed that without a doubt the South will rise again and this time remain master of everybody and everything within its dominion." The square came to life, the Klu Kluxers were shouting, jeering and in obvious ecstasy. God bless America."

Reagan went on to win every Southern state except Georgia, Jimmy Carter's home state. And upon assuming the Presidency, Reagan set out to shut down the Dept. of Education that Carter started, crush the teachers' (and everyone else's) union, and to end the "public school monopoly." If Reagan were alive today, he would, no doubt, be happy to see the spread of corporate (for profit and non-profit) welfare charter schools in his home state of California, where principals hire and fire at will, and where black and brown children are told lies about their bright future chances while their past is hidden from them.

Which brings us to another Mississippi memory, one that precedes the three civil rights murders and Reagan's pre-empting of its commemoration 16 years later. It was 1955, and a boy named Emmett Till came into town (Money, Mississippi) to buy candy with his cousins. Some boys said they heard Emmett whistle at the white female store owner's wife that day. That same night Emmett was taken by masked men from his bed and later tortured, brutalized, and shot in the head. Before his 14-year old body was dumped in the Tallahatchie River, the murderers tied a broken industrial cotton gin fan to his neck with barbed wire so that he would sink to the bottom.

Last week in one of those charter schools where teachers can be hired and fired at the whim of a principal, two teachers, Marisol Alba and Sean Strauss, were fired for signing a student petition to protest the censoring of a Black History Month remembrance of the lynched boy, Emmett Till. It seems that remembering the past does not fit the charter school mission of preparing these children to compete in a global economy, an economy that has no place for the reality of their struggle to achieve personhood, and no place for a poem by seventh graders called "A Wreath for Emmett Till," a wreath intended to replace that broken fan and barbed wire that took Emmett Till to his watery grave.

Administrators at a Los Angeles charter school forbade students from reciting a poem about civil rights icon Emmett Till during a Black History Month program recently, saying his story was unsuitable for an assembly of young children.

Teachers and students said the administration suggested that the Till case — in which the teenager was beaten to death in Mississippi after allegedly whistling at a white woman — was not fitting for a program intended to be celebratory, and that Till's actions could be viewed as sexual harassment.

The decision by Celerity Nascent Charter School leaders roiled the southwest Los Angeles campus and led to the firing of seventh-grade teacher Marisol Alba and math teacher Sean Strauss, who had signed one of several letters of protest written by the students.

The incident highlights the tenuous job security for mostly nonunion teachers in charter schools, which are publicly financed but independently run. California has more than 600 charter schools, and their ranks continue to swell. According to the California Teachers Assn., staff at fewer than 10% of charter schools are represented by unions.

"I never thought it would come to this," said Alba, who helped her students prepare the Till presentation, in which they were going to read a poem and lay flowers in a circle. "I thought the most that would happen to me [after the event was canceled] is that I'd get talked to and it would be turned into a learning and teaching experience."

School officials refused to discuss the particulars of the teachers' firings but said the issue highlights the difficulty of providing positive images for students who are often bombarded by negative cultural stereotypes.

"Our whole goal is how do we get these kids to not look at all of the bad things that could happen to them and instead focus on the process of how do we become the next surgeon or the next politician," said Celerity co-founder and Executive Director Vielka McFarlane. "We don't want to focus on how the history of the country has been checkered but on how do we dress for success, walk proud and celebrate all the accomplishments we've made." . . . .