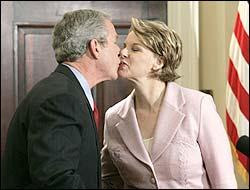 Editorial from the News Leader of Staunton, Virginia:

| Our View |: Remove this millstone


President George W. Bush's signature legislation — the rigidly inflexible education reform package called No Child Left Behind — has been a millstone around the neck of America's public education system since it was signed into law in 2002. Everyone seems to "get" this — except President Bush and his rigidly inflexible Secretary of Education, Margaret Spellings. Lawmakers from all 50 states belonging to the National Conference of State Legislatures — Republicans as well as Democrats, including our own Sen. Emmett Hanger Jr., who chairs the NCSL's Budgets and Revenue Committee — have declared Bush's education edict unworkable and called for 40 changes to fix it. State after state has mounted challenges to NCLB, only to be ignored or given an arrogant "my way or the highway" answer by the Bush administration's Department of Education. Bush's home state of Texas — also home to Margaret Spellings — has had it with NCLB. The attorney general of Connecticut has sued the federal government over the unfunded mandate aspects of NCLB. Similar lawsuits have been filed by the largest teachers' union in the nation, the National Education Association, as well as school districts in Michigan, Texas and Vermont. Earlier this year, the entire Virginia House of Delegates — including our local legislators, Del. Steve Landes, R-Weyers Cave, Del. Chris Saxman, R-Staunton, and Del. Ben Cline, R-Lexington — unanimously signed onto a bill asking to have Virginia waived from some of the requirements of NCLB.

Despite all this, Bush's band has played merrily on. One hundred percent pass rates — even from severely disabled children and those who do not speak English — are demanded and expected. No money is forthcoming to fund these expectations, however — not that it would matter; the demands made by NCLB are impossible, unworkable and inflexible. The law is a shining example of only one thing — why it is so inadvisable for the federal government to dictate decisions that should be made only at the state and local level.

Since the federal government has so cavalierly ignored the multiple cries for help from Republicans and Democrats in every state in the union, perhaps they'll listen to a few of their own kind. After all, what Congress giveth, it can also take away.

This past week, more than 50 Republican members of the House of Representatives and Senate broke ranks with the president by introducing legislation that would severely undercut Bush's signature legislation by allowing states to opt out of its testing mandates.

That would certainly be good news for Virginia, which has been in a double bind trying to meet and reconcile the requirements of its own Standards of Learning program — in place years before NCLB — with the demands of the federal program.

It would be good news for the entire country's public education system, which finds itself being punished for things over which there is no control — like the aforementioned 100 percent pass rates for the severely handicapped and children who do not speak English. It would be good news for the quality of education in the United States. Schools across the nation have had to scuttle programs for the gifted and talented, the arts and anything that does not "teach to the test" in order to meet NCLB's demands.

Please, Congress — make it so.