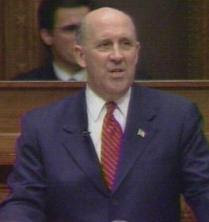 The Gestapo tactics of this Department of Education, and the gag rules being imposed on educators when it comes to sex education, is finally being met with stiff opposition as Governor Jim Doyle of Wisconsin leaves $600,000 on the table.

Gov. Jim Doyle has turned down about $600,000 in federal abstinence education money because new rules would limit how much recipients could talk about contraception or sexually transmitted diseases this year.
Doyle asked the Department of Health and Family Services to notify federal authorities of his decision, department spokeswoman Stephanie Marquis said last week.
Wisconsin becomes one of a handful of states to reject money from the Title V abstinence program, with a national budget of $50 million, for the current fiscal year.
As many as 12 other states are considering leaving the program, said Bill Smith, vice president for public policy for the Sexuality Information and Education Council of the United States, which promotes comprehensive sex education.
"It seems to me there is some sanity returning to the notion that sexuality education is about public health and not about hyper-moralism and ideology," he said.
Although the program's funding recipients had more discretion in making their own programs in the past, new rules this year require the programs to teach that sexual activity outside of marriage could have harmful physical and psychological effects, Marquis said.
at 6:10 AM