Slavin Knows a Spellings Lie When He Hears It 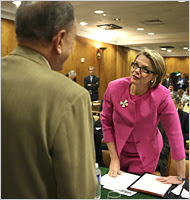 (Photo by Doug Mills, New York Times)
Reading First has been pumping a billion dollars a year to the Oregon Mafia for five years now, and the Lyon-Carnine-Good bosses now own the vast majority of the reading curriculums across America. Such sweeping change could not have been accomplished legally, as repeated reports from ED's OIG now show.

The victims of this crime wave are, of course, the children and the taxpayers. Learning to read for children across America, especially the neediest ones, has been turned into a behavioral chain gang that is more about shaping children's minds to mouth meaningless syllables than about instilling a love for books and for learning. This, of course, is a necessary component in the the third-worlding of America, where poor children are trained from an early age to accept any meaningless job they are destined to inherit under the directions of the oligarchs. The world is flatter and flatter, indeed!

Finally, finally, a little light of day is shining under the big slimy rock of Reading First. Yesterday the Cherry Blossom queen bowed, or is that cowered, before a Congressional committee looking into the sleaze, corruption, and law-breaking of Maggie's Reading First managers. She was there to make nice and assure Congress that she had cleaned up the entire mess.

It was left up to Dr. Robert Slavin, owner Success for All, to point out to those present that Spellings's assurances were simply more lies:

After Ms. Spellings left the hearing, Robert Slavin of Johns Hopkins University, whose Success for All reading program was shut out of many states under Reading First, said he did not think the secretary’s promises went far enough. “I haven’t seen the slightest glimmer of even intention to change,” Dr. Slavin said.

Because schools had already chosen their readng curriculums, promises to clean up Reading First now meant little, he said. He compared them to finding eight innings into a baseball game with a score of 23 to 0 that the opposing team had been playing with cork bats.

Reading First was required by law to finance only reading programs backed by “scientifically based reading research,” and the Education Department was prohibited from mandating or even endorsing specific curriculums. But the program has been plagued by accusations that states were steered toward a handful of commercial reading programs and testing instruments.

With only two Education Department employees in charge of the vast program, the administration relied largely on private contractors to advise states on their applications for grants, screen products for scientific validity and weigh applications. The inspector general found that several of these contractors wrote reading programs and testing instruments that were competing for money, and that they gave preference to products to which they had ties.

Ms. Spellings has maintained, and said again under questioning Wednesday, that the problems with Reading First occurred before she became education secretary.

She denied accusations from a former political appointee at the department, Michael Petrilli, who said she had essentially run Reading First from her post as domestic policy adviser at the White House. [Petrelli knows something] Mr. Petrilli is now a vice president at a nonprofit education research foundation. Asked about Madison, Wis., where educators gave up $2 million in Reading First money because they would have had to drop a so-called balanced literacy reading program that they said had been successful for the district, Ms. Spellings said she was unfamiliar with the particulars of Madison’s reading program. But she defended Reading First’s ground rules under her predecessor, Rod Paige, saying the program did not exclude specific reading curriculums, but intended only to ensure that they were backed by research.