New Jersey's Commissioner of Education, Lucille Davy, has been a long-time devotee of Achieve, Inc. and the Business Roundtable's agenda to remake American high schools in the corporate image. She did work with Achieve, Inc. before being named Commissioner, and New Jersey was part of the original 13 states signed on to the American Diploma Project (ADP), which grew out of the big high school summit hosted by Bill Gates in February of 2005. Now two years later, a slick PR campaign by Achieve, Inc., BR, and the New Jersey Chamber of Commerce is moving across the state of New Jersey (and 25 other ADP states) to scare an unconvinced public into an anti-democratic reformation of New Jersey high schools that will look like NCLB on steroids. The plan was operationalized in September 2005 with no research or empirical data to substantiate it, and the political pawns are now in place to move the game forward. 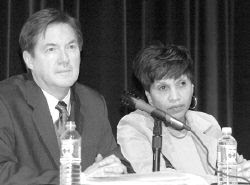 Here is a clip from a recent news story in the Atlanticville on the meeting at Long Branch Middle School, attended by less than a hundred citizens. Interestingly enough, Jay Doolan (in Atlanticville photo at left) notes in this clip that plan was finished long before any public input was sought:

Input gathered will be included in a series of recommendations presented to Gov. Jon Corzine and other members of the state Legislature to be implemented in high schools throughout the state.

The first step of the Department of Education's plan would be to ensure that the standards for language arts, math and science in each school are aligned to the state and national benchmarks.

"That work is finished," said Doolan, "and we're ready to take it to the state Board of Education. After it is adopted, we will work with educators in the state to implement it."

Doolan said that the second step in the process of reorganizing high schools statewide, will be to restructure requirements for students.

"We still believe that all students should take four years of English," he said, "but we need to better define what is English I, English II and so on."

Now we find that Commissioner Lucille Davy has moved with blitzkrieg speed to reorganize the Department so that Achieve's corporate plan can move forward. This comes despite skepticism and resistance from the Legislature, which "explicitly authorized up to $750,000 for an independent review of the Department by outside experts." A central part of that reorganzation, to be sure, is to abolish the separate Abbot Division and to ditch the Special Review Assessment (SRA), whereby more than a third of Abbot 12th graders graduate from high school each year, along with large numbers of ELL, special ed, and general ed students.

Here is a chunk of the latest newsletter from the Ed Law Center in Newark:

Disregarding public objections and the state legislature’s call for an independent review of the NJ Department of Education (NJDOE), Commissioner Lucille Davy pushed through a "reorganization" of the DOE at a March 7 meeting of the NJ State Board of Education. The "reorganization" abolishes the separate Abbott Division and replaces it with an "Office of Abbott Implementation" under a newly formed "Division of District and School Improvement."

In December, the legislature had refused to act on legislation, supported by Commissioner Davy, directing her to develop a new reorganization plan for NJDOE. Instead, citing widespread dissatisfaction with NJDOE performance, the legislature explicitly authorized up to $750,000 for an independent review of the Department by outside experts. The independent review is intended to assess the Department’s staffing patterns, technical resources, and overall capacity to fulfill its growing obligations under Abbott, No Child Left Behind, and related responsibilities.

passed overwhelmingly, 73-7 in the Assembly and 35-1 in the Senate and was signed by Governor Corzine on January 29. But to date no action has been taken to solicit bids and hire qualified experts to conduct the evaluation.

In a March 6 letter to Commissioner Davy,

the Our Children/Our Schools campaign encouraged her to delay any reorganization until the independent review ordered by the legislature was completed and until the public had a chance to respond to the proposed elimination of the division charged with overseeing implementation of New Jersey’s landmark Supreme Court Abbott decisions on educational equity.

Instead, after months of rumors that changes were in the works, the Commissioner’s presented her plans to the State Board with no prior public notice or review. Despite gaps in her organizational chart and many uncertainties about the implications of the reorganization plan, the State Board approved Davy’s requests. As part of the reorganization, Willa Spicer, a former Assistant Superintendent in South Brunswick and longtime consultant to the NJDOE on assessment issues, was named Deputy Commissioner. Penelope Lattimer, former DOE chief of staff, was named Assistant Commissioner to head the new Division of District and School Improvement, which will include the Office of Abbott Implementation whose director has not yet been named. Other Assistant Commissioner positions included in the reorganization plan are Jacqueline Jones, early childhood; Barbara Gantwerk, student services; Jay Doolan, academic and professional standards; and William King, field services. . . .

Will New Jersey citizens and the citizens of other states allow Achieve, Inc. and the Business Roundtable take over their high schools and to crush the limited prospects of the youngsters who have been cheated by the poverty and racism that these crazed ideologues simply ignore?
at 8:38 AM