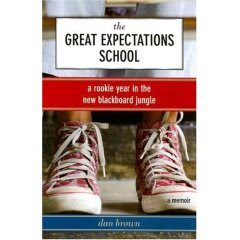 Highly recommended (with Perlstein's Tested. . .), especially for teacher education students where faculty know nothing of or steer clear of the realities of NCLB implementation. Review by Jude Rabin:


I just finished reading The great expectations school: A rookie year in the new blackboard jungle by Dan Brown, a 26-year-old TFA dropout who spent 1 year in the Bronx and is now enrolled at Teachers College. Anyway, here's an excerpt from his conclusion and a ray of hope that the younger folks might perhaps get it right some day:

"A clear step in the right direction would be to scrap the No Child Left Behind legislation and to pass new, progressive education laws. NCLB was conceived to hold each school accountable for its students' academic proficiency, a noble aim. However, by using standardized testing as the sole tool to calibrate success, the government has created in the school system a Frankenstein monster of compliance, with its energies devoted in all the wrong directions."

What Brown astutely recognizes, and what most Americans still fail to recognize can be found in this paragraph:

"No single line graph or shortcut can close the social-class achievement gap in America. The idea that high stakes testing will motivate positive change has rationalized massive under funding and the ignoring of the complex needs of students (art, music, and physical education are just a few). Educating the youth of America is not an endeavor that can be performed simply, or on the cheap. As things stand, the primacy of the standardized test saps the most important human elements of education, a wholly human institution."

Brown places the responsibility for improving the lives of American youth at the feet of the voters, "who must use their power to force lawmakers to recognize this issue as a priority."

There's not much new in his book that hasn't been already documented, recorded or said before about poverty and education, but his call to action and outrage over NCLB should be a call to arms for the next generation --because this one doesn't seem to get it. Delaying the date for 100%proficiency, instituting a cheap mass produced version of growth models and more databases, national standards, blah, blah, blah, really isn't the issue - now is it?

The entire discussion must move in a whole new direction and be broadened to include the bigger issues, or we will continue to see the further balkanization and segregation of our society through apartheid education. The stakes are too high to settle for a few worthless crumbs to appease the teachers unions and just postpone the day of reckoning.

KUDOS TO DAN BROWN! He can be reached at danbrownteacher@gmail.com