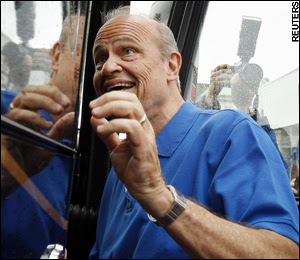 I know it's difficult to master the Spellings education doublespeak that offers local control and centralized sanctions, or is that local sanctions and centralized control. But Grampa Fred has a long way to go:

. . . . Earlier, Thompson told a crowd in Jacksonville that Bush's signature education program isn't working and that he would provide federal education money with fewer strings attached.

He added that there are problems with Bush's No Child Left Behind program, which requires annual testing and punishes schools that don't make progress.

"No Child Left Behind — good concept, I'm all for testing — but it seems like now some of these states are teaching to the test and kind of making it so that everybody does well on the test — you can't really tell that everybody's doing that well. And it's not objective," Thompson said.

Instead, he said the federal government should be providing block grants as long as states set up objective testing programs.

He said his message to states would be, "We expect you to get objective testing done and publicize those tests for the local parents and for the local citizens and suffer the political ramifications locally if things don't work out right."

The former star of NBC's "Law & Order" was responding to a question as he began a three-day bus tour of Florida, his first visit to the state since announcing his candidacy last week. A woman asked what he would do for education. He told her decisions on how schools are run should be made by local and state officials, not dictated out of Washington.

Thompson voted for the No Child Left Behind law in 2001, as did most of his fellow senators.

"It's your responsibility," he said. "If you don't like what's going on, don't get in your car and drive by your school board and maybe drive by the capitol and get on an airplane and fly to Washington and say, 'I don't like the way the school down the street is being run.'"

Got that? That's okay--he has trouble remembering Terry Schiavo, too.