Spellings vs. the Facts (Bilingual Edition) 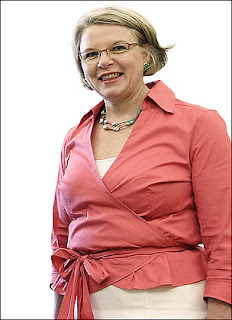 With her Bachelors Degree in Poli Sci and her on-the-job training as Lead Deconstructor of Public Education, Spellings continues to demonstrate that there is no niche of educational policy that is safe from that painfully familiar Bush brand of swaggering ignorance and grinny denial of the facts.

If she had ever bothered to consult the scientifically-based research that her own Department insists upon when it is in their ideological interests to do so, Spellings would have found ample empirical evidence to support a conclusion contrary to the right-wing ruling of her gut, prominent though it surely is.

I raised this issue when blogging that U.S. Secretary of Education Margaret Spellings has objected to a provision in the House Education and Labor Committee's "discussion draft" for reauthorizing the No Child Left Behind Act involving English-language learners. The provision would permit school districts to give ELLs state tests in their native languages for up to five years, with the option of extending that time for two more years on a case-to-case basis. "That's simply too long," Ms. Spellings wrote in a letter to leaders of the committee, and added that the provision would provide an incentive to "slow down" the learning of English rather than speed it up. Now, states can give students tests in their native languages for three years, with an option of extending that time for two additional years.

Some people in the field think extending the amount of time for students to take native-language tests will encourage more school districts to offer bilingual education. The secretary's comment prompts me to speculate that by saying that permitting the use of native-language tests for many years is a disincentive to speed up the learning of English, she is also meaning to imply that providing bilingual education for a long time may "slow down" the learning of English.

I might be wrong to make such an assumption but, regardless, I put the following question to two experts in the field: Is the learning of English by students slowed down by some kinds of bilingual education?

Both researchers agree that English-language learners in grades 1-3 taking bilingual education may not test as well on an English test as ELLs in English-only programs, but by the end of elementary school, the scores on English tests even out.

Here's an excerpt from an answer by Deborah Palmer, an assistant professor of bilingual/bicultural education at the University of Texas, Austin: "Kids in bilingual programs often don't test in English in the early elementary grades as [well as] kids in English-only programs, but those test scores even out by 4th or 5th grade, and bilingual education kids will stay higher over the long term, into middle and high school, and be more successful academically in English and other areas. English-only/English-as-a-second-language instructed kids, meanwhile, tend to lose ground after 3rd grade, and show a flat or even downward trend in test scores in middle and high school. I'm referring here to two large-scale studies: Ramirez et. al. (1992) and Thomas and Collier (2003)."

Donna Christian, the president of the Center for Applied Linguistics, got some input from researchers at her center and responded with the following comments:

"I assume that 'learning of English' includes oral language and literacy (and probably learning of academic content through English). ... It's not accurate to say that the learning of English is slowed down because students are learning two languages at the same time. The students who are becoming bilingual may be on a slightly different trajectory in their English-language development than their English-only peers or their English-language-learner peers who are receiving instruction all in English. ... Our research in two-way immersion programs shows that ELLs who begin the program by 1st grade are quite proficient in oral English by 3rd grade. Literacy skills in English show a lot of variation, some of which relates to the grade level at which literacy instruction begins in the program."