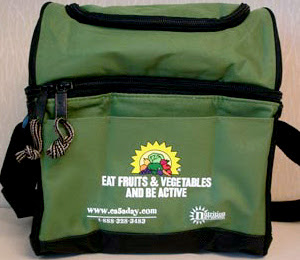 Adding lead to paint helps the paint dry faster. The Market made them do it--it wasn't Chairman Mao. That's what I call trading one totalitarian system for another without missing a sale. Wonder if the State of California will apologize to the Chinese like Mattel did. From the LATimes:

The hundreds of thousands of lunchboxes given away by state health officials were designed to promote healthful habits, bearing slogans such as "Eat Fruits & Vegetables and Be Active." Just one problem: At least some of them were made with unhealthful levels of lead.

The California Department of Public Health said Thursday that it was recalling 300,000 green and blue canvas lunch coolers made in China and distributed throughout the state at health fairs and other events since 2004.

"It's unfortunate that an item we're using hopefully to promote healthy behavior is discovered itself to be a potential health hazard," said Dr. Mark Horton, director of the state's public health department and a pediatrician. "Kids have a habit of putting their hands in their mouth a lot, and the food inside the lunchbox possibly could be contaminated."

The recall underscores the difficulty of ensuring the safety of millions of products produced around the world and sold -- or given away -- in the United States. A wave of high-profile toy recalls this year, including millions of Mattel Inc. products containing lead paint, spurred manufacturers and retailers to implement new controls. The problem with lead in consumer products, however, goes beyond one industry, activists say.

No injuries have been reported as a result of the lead-tainted lunchboxes, California health officials said. But no exposure to lead is considered safe.

Lead is particularly dangerous to the developing brains and nervous systems of children. Exposure, usually as a result of deteriorating old paint in a home, can affect a child's learning ability, hearing, height, nervous system and gastrointestinal tract and, in larger doses, can cause seizures, coma and death.

Children deficient in iron and other key nutrients are particularly susceptible to lead poisoning. Many of the now-recalled lunchboxes went to low-income Californians, including recipients of food stamps.

Subsequent tests by the state's Department of Toxic Substances Control found that multiple parts of the boxes, such as the vinyl lining, contained lead.

The highest lead levels were found in the bag's decorative logo, a shining yellow sun and brightly colored fruits and vegetables along with the www.ca5aday.com Web address.

Although lead paint has been banned in the United States since 1978, factories in some countries have used lead as an inexpensive way to, among other things, make paint dry faster and last longer. . . .