Apparently, there is some work remaining to be done in Jena and in other racist strongholds across Louisiana:

Mychal Bell, one of the so-called 'Jena 6,' apparently will not be released from juvenile detention today. Bell attended a hearing in juvenile court in Jena, La., this afternoon, one day after a massive civil rights protest in the town involving the arrest of six black teens for the alleged beating of a white teen.

From the AP: Lawyers would not comment because juvenile court proceedings are secret. But the father of one of Bell's codefendants said Bell's bail request was denied. Bell's mother left the courthouse in tears and refused to comment. 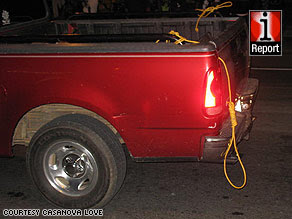 Meanwhile, rednecks near Alexandria were arrested after driving around with extension cord nooses hanging from the tailgate of their pickup truck:

ALEXANDRIA, Louisiana (CNN) -- Authorities in Alexandria, Louisiana, arrested two people after nooses were seen hanging from the back of a red pickup Thursday night, the city's mayor told CNN.

A photograph taken by I-Reporter Casanova Love shows a noose hanging from a red pickup.

Alexandria is less than an hour away from Jena, Louisiana, and was a staging area Thursday for protesters who went to the smaller town to demonstrate against the treatment of six black teens known as the "Jena 6" in racially charged incidents.

Police say the 18-year-old driver of the truck was charged with driving while intoxicated and inciting to riot and also may be charged with contributing to the delinquency of a minor -- the 16-year-old passenger.

As police were questioning the driver, he said he had an unloaded rifle in the back, which police found. They also found a set of brass knuckles in the cup holder on the dashboard, according to the police report.

The passenger told police he and his family are in the Ku Klux Klan, the police report said. He also said he had tied the nooses and that the brass knuckles belonged to him, the report said.

Watch what police found on the truck »

At least one of the nooses was made out of an extension cord, according to the police report.

Alexandria Mayor Jacques Roy said those arrested were "from around Jena" and not in the same parish as his city.