Global Warming for Children--and Adults Who Should Know Better 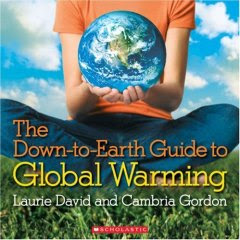 A global warming denier group is attacking The Down To Earth Guide to Global Warming, the new children's book I co-authored with Cami Gordon.

Our crime? It turns out one of the illustrations in the book was accidentally mislabeled. This has got the gang at the at the Science and Public Policy Instituted up in arms - or at least pretending to be -- no doubt hoping to ride our coattails, create some controversy, and promote their own new book.

Why am I not surprised? These "skeptics" have grown so predictable.

Even so, I'd like to thank the SPPI for pointing out this minor error to us. However, we have checked with climate experts who confirmed that the text accompanying the mislabeled illustration, and our description of the close relationship between CO2 and temperature, is accurate and fairly represents the current state of scientific knowledge.

Apparently the climate change "skeptics" have grown so desperate in their attempts to hide the truth from the American people that they've taken to spending hours scrutinizing a children's book, trying to marginalize the urgent information it contains about global warming. And through all their efforts, all they uncovered in a hundred pages was a single mislabeled illustration -- an illustration accompanied by accurate text. Now they've launched a full 'report' attempting to discredit the entire book, even though they can't find anything wrong with it besides the flipping of two colors on a solitary illustration.

So thanks guys! We will correct the illustration in the next edition. We're happy to learn that that was the only question SPPI had about the entire fact-filled book! The Down To Earth Guide translates complex scientific facts about global warming into language that is easily understood by kids.

I hope children of all ages read this book because, ultimately -- and unfortunately -- global warming is the grim legacy we are passing on to them.