Hoping to convince America to re-up for the continuing war against public education, the White House has brought out, by far, its most likable recruiter to put that buttery school marm spin on the horrid fact that parents are expected to sacrifice their children to another six years of educational genocide:

"The test isn't really punitive, it's not to punish people," the first lady said this week. "It's just to find out what the problems are. It's like, you wouldn't go to your doctor and say, 'Tell me what's wrong with me but you can't run any tests.' The outcry against the tests, to me, just seems really silly."

Laura, Laura, Laura. First off, your metaphor is lost on the poor people you are hoping to sway, since most of them don't have doctors. They have emergency rooms. If they did have doctors, I doubt that it would the kind of doctor who decides to remove a vital organ when the test shows the patient is sick, who calls up every day to threaten more organ removal if recovery isn't quick, and who repeats the same test-organ removal process regardess of how much the patient has tried to get well. 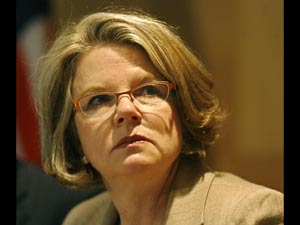 As part of their campaign, Bush and Spellings discussed the education bill in a rare, invitation-only briefing this week with female White House reporters. And Spellings is on a bus tour of the Midwest, highlighting back-to-school issues and the No Child Left Behind debate.

At the Rock and Roll Hall of Fame in Cleveland, she sang a chorus of Stevie Wonder's Signed, Sealed, Delivered — an anthem, perhaps, for the White House's hopes on the bill.

Or perhaps an indictment? Or impeachment articles?