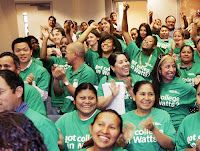 With the help of some serious arm-twisting, pocket padding, politician buying, and $7,800,000 from Bill Gates, the "non-profit" corporation, Green Dot Schools, now has John Locke High School in Watts/L.A. under private management.

Green Dot is a serious contender for America's urban school market, particularly the Hispanic market. In fact, they are patiently awaiting Bloomberg's signal in NYC to get the charterization going there. Their Board of Directors presents a picture of an outfit driven by Catholic pedagogy, Telemundo, Oscar De La Hoya and Golden Boy Promotions, Eli Broad's CEO, Comcast, ultra-slick marketing expertise, and the L.A.janitors' union, which has a never-ending supply of bodies to fill the green tee-shirts, just like the ones that were bussed in and marched out yesterday to cheer on the capitulation of public responsibility for poor children's education. As one parent noted, the board "… just said: Give the children away."

Capping off the Board of Directors is Joanne Weiss, CEO of the NewSchools Venture Fund, a bottomless repository where corporations can side-step their tax burdens by making tax-credited contributions toward the further privatization of America's schools via "non-profit" corporations like Green Dot.

Here is how the L. A. Times covered it yesterday.

One of the activists supporting the takeover said this:

“Locke High fails to provide the necessary safety net for our children. It’s burning our teachers out,” Andrews said. “They have to be social workers, parole officers, they have to be everything other than teachers. Kids are coming to school burned-out because they have to get through gang-infested neighborhoods. When they get to school they are tired.”

The question not on yesterday's agenda: How will the privatization of Locke H. S. have any effect on any of those problems that children bring to school every day as a result of poverty?
at 9:29 AM