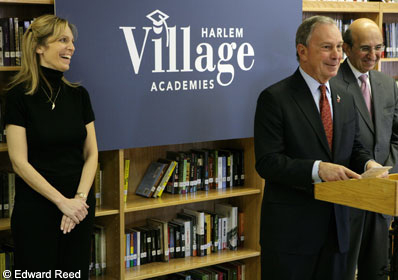 There is reason for Deborah Kenny to be smiling.  As CEO of Harlem Village Academies charter school in charge of 450 students in total, she raked in $442,000 this past year.  Connection to Cathie Black?  Nothing having to do with education, it seems, even though Black touts her connection to Harlem Village as the source of her cred on all things educational.  From the Daily News:


City schools chancellor nominee Cathie Black insists she's connected to public education via a highly touted charter school - but a close look shows she's had no contact with students, parents or teachers there.

Officials at the Harlem Village Academies admit the school's National Leadership Board, which Black joined just five months ago, has never met.

That board "has no operational or governing authority" over the school and exists for "support purposes only," the school said in response to Daily News questions.

Black primarily advised the school's CEO, Deborah Kenny, on "management, leadership, and the development of a book" Kenny is writing, the school said.

Harlem Village parents and former employees had little knowledge of Black, who is expected to get a state waiver that will allow her to take the job despite having almost no education experience.

"No, no, no, she's not with us," said the parent of a sixth-grader. "She's not on our board. We have a lot of people who give money, lots of very famous people come here. That could be what it is."

A second parent added, "I've heard of Cathie Black from the papers, but she's not part of this school."

Black's link to Harlem Village appears to be her only connection to New York public schools.

She went to Catholic school, sent her children to a Connecticut boarding school and spent her career in the publishing business.

Far from the average school
A former Harlem Village employee said Black visited the school in 2009 at Kenny's invitation as a possible donor. After that, the former employee never saw Black again.

Harlem Village officials said Black started on the board in July, a month after she lost her job as president of Hearst Magazines.

It's not clear when Mayor Bloomberg first approached Black with the idea of becoming chancellor.

Whatever Black's role there, Harlem Village has little in common with the average public school.

Sounds to me Kenny ought to advising Black.
at 3:28 PM