The Kanamits of Kaplan "Serving the Poor" 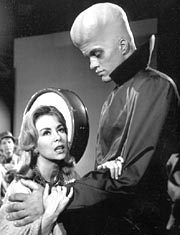 I don't want to pick on Kaplan too much, for it is surely not the only corporate culture devoted to "serving the poor."  Fortunately, though, for many millions who were lined up to fly away on what they expected be a great educational adventure, a few hardworking Congressmen have been able to translate Kaplan's slick catalog, "To Serve the Poor:"
DON'T GET ON THAT EDU-SHIP, FOLKS --"TO SERVE THE POOR"--IT'S A COOKBOOK!


. . . .“We purchased colleges that served mostly poor students, and we have embraced that role,” Mr. Graham said. “For students with risk factors, older working students with children, Kaplan has dramatically better graduation rates than community colleges.”

The company has acknowledged, however, that the new rules could hurt Kaplan. According to 2009 data released this summer by the Department of Education, only 28 percent of Kaplan’s students were repaying their student loans. That figure is well below the 45 percent threshold that most programs will need to remain fully eligible for the federal aid on which they rely. By comparison, 44 percent of students at the largest for-profit, the University of Phoenix, were repaying their loans.

Kaplan is also facing several federal whistle-blower lawsuits whose accusations dovetail with the findings of an undercover federal investigation of the for-profit industry this summer, including video of high-pressure recruiting and unrealistic salary promises.. . .