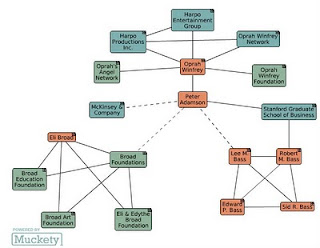 For some it has been a mystery why someone with Oprah's public image would be up to her neck in corporate education reform built on planned segregation and exploitation of the poor and the brown.  Yet her recent 60-minute infomercial with Gates and Guggenheim to pump Waiting for Superman is indicative of her aggressive parroting of the corporate welfare charter meme.  Same with the televised love fest she sponsored for New Jersey's loudmouthed governor, Newark mayor's Cory Booker, and the billionaire twink, Zuckerberg.

But as Bracey always said, just follow the money to find the source of the heartfelt commitment.  Most of us forgot or never noticed that Oprah became a member of Eli Broad's economic family when she hired Eli's chief invesment officer (another billionaire) to oversee her own proliferating billions back in May of this year.  So Oprah does, indeed, know where her bread is buttered and also who can get her even more bread.

The article from Street Insider.com, and the chart (click it to enlarge) is from Muckety (btw, Lee Bass is an oil tycoon and former Bush Pioneer):


May 20, 2010 1:51 PM EDT
Oprah Winfrey has hired a chief investment officer at Eli Broad as the first member of a team she is putting together to aid in the handling of her personal investments and fortune made from television, magazines and movies, according to a report in the Wall Street Journal today.

Billionaire and philanthropist Peter Adamson will be the first piece in the full investment organization surrounding Winfrey, who is estimated to be worth $2.4 billion -- making her one of the richest African Americans of the 20th century.

Adamson, 47, has served as the investment chief since 2001 and is considered a strong addition to the family office that will manage Winfrey’s wealth. She came to hiring Adamson through her longtime law firm, Ziffren Brittenham LLP, according to the WSJ's sources.

While working for Broad, Adamson has a record of making 3-4 percent above the indices, while managing $2.5 billion in investments for the Broad Foundation.. . .