The Gates Foundation and the Future of Public Schools 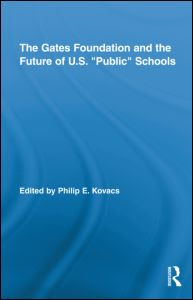 Please ask your bookstore and library to order this book.  No, I nor any of the other authors have made or will make a dime from it.  But it could turn into a collector's item before the ink dries if you don't demand to see copies available.  The price, itself, is ridiculous and enough to discourage sales.

Ravitch, a respected historian and established author, was turned down by 8 other publishers before she found one with the guts to publish her latest book on the Billionaire Boys' Club.  Conspiracy?  No. Cowardice?  You betcha.

Description:  There has been much public praise for the Bill and Melinda Gates Foundation’s efforts to reform public education. However, few scholars have engaged substantively and critically with the organization’s work. While the Gates Foundation is the single largest supporter by far of "choice" initiatives particularly with regard to charter school formation, it is pushing public school privatization through a wide array of initiatives and in conjunction with a number of other foundations. What are the implications for a public system as control over educational policy and priority is concentrated under one of the richest people on the planet in ways that foster de-unionization and teacher de-skilling while homogenizing school models and curriculum? The Gates Foundation and the Future of US "Public" Schools addresses this crucial, unanswered question while investigating the relationships between the Gates Foundation and other think tanks, government, and corporate institutions.