This past weekend while channel surfing I found that Microsoft-NBC has reached new lows in its weekend prison programming.  It has now moved beyond desensitizing and voyeuristic window-peeping into staged adult prison life to now focusing on a cleansed view of incarcerated teenagers.

Below is the a post from almost five years ago, which seems as relevant now as it was then:

MSNBC, The Prison Channel, Will Never Show This
January 10, 2009

I was amazed over the holidays at the hours and hours of non-stop prison "documentary" footage on MSNBC, with the creepy John Seigenthaler as host and cheerleader for prison guards and wardens, who are never seen to be capable of doing anything wrong or even vaguely questionable. This kind of corporate media desensitizing of the public to the plight of the incarcerated in America, which has the largest prison population on Planet Earth, presents real questions about the social responsibility and educational responsibility of the mass media.

MSNBC's morbid fascination may be seen as helping to set the stage for the future urban police state, for which urban schools are certainly playing a role, too. (Watch any group of young children in urban schools holding together their imaginary straightjackets while mechanically marching to lunch, and you will see another part of the prelude).

Well, here is some footage you will never see on the MSNBC lockdown marathons. The first is from Oakland, where a young black man, already in custody, was repeatedly shot and killed at point blank range by a BART cop. 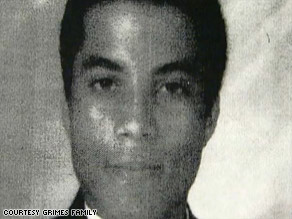 And today comes this from Raw Story about a young black man murdered by NOLA police:


A young, black man in New Orleans is dead, slain by police officers on New Year's Day, in an incident that has outraged a community and triggered protests over what family members are calling a "murder."

The New Orleans man, 22-year-old Adolph Grimes III, traveled to his grandmother's home near the French Quarter in order to celebrate New Year's Eve with his fiance and their 17-month-old son. Three hours after arrival, around 3 a.m., he was found dead a block from the front door.

The Orleans Parish coroner said Grimes was shot 14 times, including 12 times in the back.. . .