In October AFT launched its Principles that Unite Us (PUU), a piece of foamy rhetoric that offers the impression of resistance to corporate ed reform while providing a rubber stamp to CorpEd's status quo assault on public education.

PUU is full of fuzzy talk that offers plenty of corporate space to 1) continue the education genocide based on high stakes testing, 2) the implementation of the Corporate Common Core, 3) the continuing use of test scores to evaluate teachers, 4), the continuation of alt-cert schemes like TFA, 5) the continuing resegregation of schools, and 7) the continuing spread of corporate charter schools. 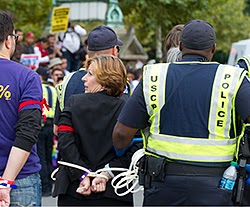 In its essence, PUU represents the semantic version of a staged Weingarten arrest to show her solidarity with the people as she prepares to go to lunch with the Business Roundtable.  Reading it you can be sure that nothing will intrude on the back room deals that have been cut with the Gates Foundation, and that Randi's lawyers are standing by so that she doesn't miss her flight to the next site of corporate domination, where she can be arrested once more as her sign of protest.

Last month the PUU groups announced that December 9 would be a Day of Action.  Looking through the list of activities, you will find this kind of Weingarten endorsed action:


MilwaukeeAs Milwaukee is home to the first voucher school program where taxpayer money is taken from community schools and given to unaccountable, for-profit schools, parents and educators are speaking out. Activists will gather for holiday caroling and a march for public education.

We are accustomed, of course, to CorpEd coopting sound ideas and concepts to justify and undergird their oppressive tactics, but to see union misleadership doing it in order to tamp down real non-violent resistance and civil disobedience adds a new wrinkle to the struggle.  But stay tuned--you never know where Randi will use her Get Out of Jail Card Free card stamped next.

Finally, it should be noted that Randi's Day of Inaction comes just one day before the Human Rights Day on December 10.  But then any coordination or association with such leftist notions as the Universal Declaration of Human Rights would not go down well at the Gates Foundation.
at 7:59 AM