American anti-intellectualism more popular than ever, and why not?

"The capitalists, from the start, complained that universities were unprofitable. These early twentieth century capitalists, like heads of investment houses and hedge-fund managers, were, as Donoghue writes "motivated by an ethically based anti-intellectualism that transcended interest in the financial bottom line. Their distrust of the ideal of intellectual inquiry for its own sake, led them to insist that if universities were to be preserved at all, they must operate on a different set of principles from those governing the liberal arts." — Chris Hedges 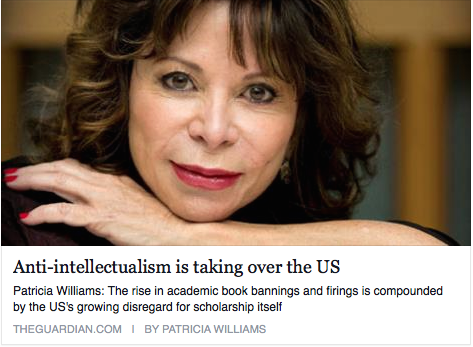 Last week I came across a two year old essay written by Professor Patricia Williams for The Guardian. I recall reading her piece some time ago (the Arizona book bannings being covered by Schools Matter as well), and reposted it on facebook with a bit of my own commentary. The post received a few interesting comments. A teacher posted the link and my commentary to the "Badass Teachers Association" (BATs) page, and to my surprise it garnered over 180 "likes" and more than 55 comments.

I believe that this is because this is a critical conversation we should be having publicly, over and over. I'm going to reproduce my commentary here, and rather than expand on it, I'll leave it to readers to add their own thoughts.

We see this anti-intellectualism in Marshall Tuck, Tom Horne, and John Huppenthal's shuttering of Ethnic Studies programs and book banning. We see it in the proliferation of adjunct professors in higher education, and the spreading infestation of predatory, for-profit schools. We see it in corporate curricula like Common Core State Standards (#‎CCSS), and the proliferation of the K-12 privatization project embodied in charters and vouchers. The war on tenure at all levels of education is further evidence. It isn't just right-wing, religious reactionaries fueling anti-intellectualism, as the demands of neoliberalism require that both critical thinking, and the institutional memory of the working class be squelched. Anti-intellectualism is a prelude to the unchallenged dominance of the plutocrat class and their corporate state. — Robert D. Skeels

"There has been an unfortunate uptick in academic book bannings and firings, made worse by a nationwide disparagement of teachers, teachers' unions and scholarship itself. Brooke Harris, a teacher at Michigan's Pontiac Academy for Excellence, was summarily fired after asking permission to let her students conduct a fundraiser for Trayvon Martin's family." — Jose del Barrio

Lastly, a perfect example of anti-intellectualism. Here's a direct quote from a racist that has been trolling me on twitter: "Professors are failures at life, thus they teach"

@rdsathene you think that you know something because you took some classes? Professors are failures at life, thus they teach