Yesterday Marian Wright Edelman weighed in on the ESEA "debate" by coming out strong against the the House version of NCLB Corporate Takeover 2.0.

Sadly in doing so, Edelman jumps onto the rickety testing-for-civil-rights bandwagon that is aimed directly for the ditch after almost 30 years of running down the same rutted path.  Obviously, Edelman still believes what liberals pretended to believe in 1988 with the passage of Hawkins-Stafford, which set in motion the standards and testing juggernaut that has been effectively used to punish and deprive poor children, rather than to provide equity and equality.

Interestingly, we see that since 1988 when the standardistas took charge and the Rule of the Business Roundtable began in earnest, the "achievement gap" that had been closing during the years of school desegregation and focus on equality, began to open up once more and resegregation began, and continues today. See charts below. 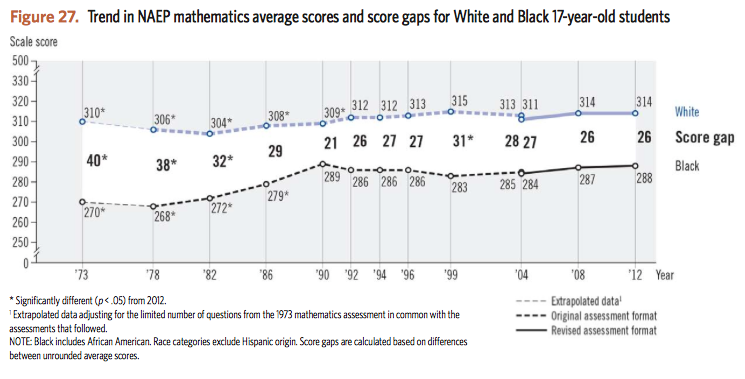 More testing to close the achievement gaps, anyone??  What fool would believe that another generation of the same "high standards and accountability" would produce different results?  Oh, yes, there is the corrupt corporate water carrier, Jonah Edelman, for one.
at 11:14 AM