Clinton cheerleaders claiming she isn't in the corporate charter camp?

“There is not a speck, not a sliced-thin scintilla of evidence to suggest that Clinton will do anything except continue straight down the same road that Bush and Obama took us. And there’s no telling what Trump will do about education, but it’s a safe bet that it will be huge, it will be business oriented, and that it will involve blustery hair-brained ignorance.” — Peter Greene

It's a tough time to be a public education advocate. The fervor over the 2016 election has partisans lashing out with an unprecedented amount of vitriol towards anyone questioning the education policies of mainstream candidates. Worst of the bunch are the supporters of presumed Democratic Party nominee, Hillary Rodham Clinton. Here's an example of the angry denials from one of Clinton's most ardent supporters:

It is also total bullshit that you keep insisting that HRC is pushing charters and ed reform. That is TOTAL BULLSHIT.

Astonishingly, this was written by a teacher member of the Badass Teachers Association (BATs). Never mind that Clinton has deep ties the Walton Family Foundation, ignore her intwinement with Center for American Progress (CAP), her association with the Broads, and all the other obvious red flags indicating that Clinton will double down on Obama's policies. Clinton is on record as completely supporting privately managed charter schools, so-called "school choice," and for that matter, the entire neoliberal corporate education reform platform. Total "BS"? Here's a screen capture right off of Clinton's campaign website, where she lauds ESSA and its support of "high-quality public [sic] charter schools":

Unequivocal. Clinton has never changed her stance on privately managed charter schools, and that's why the National Association of Public [sic] Charter Schools (NAPCS) features the following on their website. A pro-charter pull-quote by Clinton appears alongside similar ones by Bill Gates, Barack Obama, George W. Bush, and Arne Duncan. Clinton's mild criticisms of some charter schools a few months back were to placate certain constituencies, nothing more. 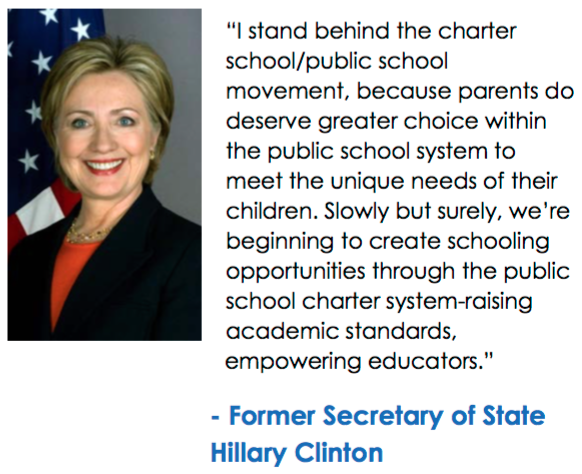 This is the same former Walmart board member who stood before the National Educators Association (NEA) Convention and had no qualms about boasting about her support for the lucrative charter school sector. The same Goldman Sachs confidant who is the favorite of the far-right Democrats for Education Reform (DFER). In sum, corporatist Jeffries of the arch-reactionary (DFER) is on record saying that Hillary Rodham Clinton is their choice to carry on their projects of privatization pushing and poverty pimping. He also states that it is because she is fully on board with their notions of "school choice" and she fully supports charter schools. Some in the BATs forum have ruthlessly attacked me, assailed my character, and called me a liar for saying as much, but to hear it out of the mouth a the hedge fund group's representative makes it a little bit harder to deny. Hillary Rodham Clinton is DFER's candidate.

The attacks on me, in any forum that I speak truth to power on education issues, are relentless. Here's something that I posted on my facebook page a bit back after an encounter with a particularly rabid Clinton supporter.

So red baiting is still a thing. I was on a teachers' message board talking about Oaxaca, Naomi Klein, neoliberalism, and privatization, and was essentially told by a right-of-center HillBot to shut up and pack my bags for North Korea.

It's like Dr. Khury Petersen-Smith writes in his powerful essay "I won't be shamed into voting for Clinton":

It was another example of a proven fact about liberalism — Democrats and their media cheerleaders save their deepest contempt not for right wingers, but for those who challenge them from the left.

Ain't that the truth! For some further reading on Clinton's education agenda check out this piece by Steven Singer and this one by Douglas Harris.

Lastly I wanted to address the dissembling about public versus private charter schools, since it has been a common form of deception employed by high-profile politicians and the billionaires that pull their strings. Clinton is an attorney, so she doesn't have the option of saying she doesn't know the legal standing of charter schools. I'm including my boilerplate prose on how charter schools are not public, since the more places this appears, the more likely this information will be disseminated:

As a Juris Doctor candidate whose specialty is education law in the era of neoliberalism, allow me to present the legal arguments on how privately managed charter schools are not at all “public.”

By definition if a charter school is operated by a for-profit company, or by a 501c3 non-profit corporation (e.g. Harlem Success Academy), then it is not a public school. The United States Census Bureau frames this latter issue best:

Because these lucrative charter schools are not public, and therefore not subject to even a modicum of public oversight, they are able violate the constitutional rights of their students. The decision in Scott B. v. Board of Trustees of Orange County High School of the Arts saw scholar Rosa K. Hirji, Esq. write for the American Bar Association:

“The structures that allow charter schools to exist are marked by the absence of protections that are traditionally guaranteed by public education, protections that only become apparent and necessary when families and students begin to face a denial of what they were initially promised to be their right.”

The distinguished Professor Preston C. Green III of University of Connecticut has written extensively on this subject. One of his recent papers examines "how charter schools have used their public characteristics to qualify for public funding under state constitutional law, while highlighting their private characteristics to exempt themselves from other laws that apply to public schools." This private-in-every-aspect except for when siphoning funds away from authentic public schools is a defining feature of charter schools.